Phnom Penh, Cambodia -- Just outside Koh Kong city towards the Cambodian-Thai border stands Wat Mondul Seyma, a seemingly pleasant place of worship that harbours a macabre lesson to all those who stray off the Buddhist path. 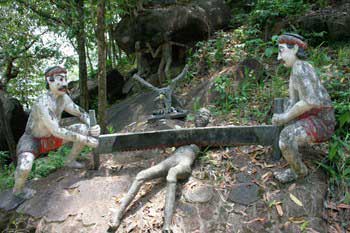 << Photo by: STEPHANIE MEE
Torture awaiting those who sin in this lifetime.

Wat Mondul Seyma, or Wat Kuk for short, lies among shady trees and fluttering prayer flags, a peaceful setting to gaze over the bright frescoes illustrating the life and teachings of Buddha.

Behind the temple there is a short, unmarked path that leads down to the sea and is open to all visitors. It is beyond this path where one cannot help but feel disconnected from the peaceful surrounds of Wat Kuk.

At first glance, the path opens up onto giant grey boulders, with the blue-grey ocean in the background, and what looks like a lively scene of stone and concrete statues emanating from the cliff's edge.

But on further inspection, this is no ordinary scene. This is a macabre, Dante-esque vision of what will happen to those unfortunate souls who commit sins in this life and are reborn in Buddhist hell.

The first scene at the bottom of the path is of a group of three terrified and naked people scrambling up a tree, while a maniacally grinning demon and his barking dog wait at the bottom, as if knowing that the others have no chance of escape, just waiting for them to fall.

To the right of this scene are three figures on a rock, two white-skinned demons kneeling and using a large lumberjack saw to hew a grimacing naked man in half, while an eagle sits behind the unfortunate man's head, gnawing on his severed hand.

A helpful sign in Khmer explains that this is what happens to those who steal other people's husbands or wives, or in other words, those that commit adultery.

Further on down the path is a bizarre cluster of figures on the giant rocks looking out onto the sea. These figures include a few white-skinned demons and a handful of half-human, half-animal figures. A demon gleefully guts a man with a human body and a pig's head, while another slits the throat of a half-man, half-duck. Meanwhile, a half-man, half-chicken watches on somberly, as if stoically awaiting his fate. Other strange stone figures also look on, blood dripping down their anxious faces and bodies.

On a rock jutting out over the sea, an emaciated man lifts his head up to the sky, his tongue lolling out of his mouth, and his expression pained, while what looks like a female figure with arms and legs missing lies motionless on the stone beside him.
Another figure in the background kneels on all fours with a giant circular saw erupting out of his back and blood dripping down his face.

The sign nearby explains that all those who take the life of another living being will surely have these horrors to endure in their next life.

Looping back to the entrance of this bizarre theme park, there is a large granite cliff with rock shelves jutting out from the wall of stone. On one of these shelves sit two female figures, arms tied behind their backs, with petrified faces looking down on the scenes of torture.

Two men wearily hold up a section of the rock face, blood streaming down from the places where the giant cliff rests on their shoulders. This is the torture that inevitably must be endured for stealing land or property in this life.

While these scenes may be grisly and morbid, they are actually common images in the Cambodian Buddhist tradition. Just like Christianity, Hinduism, Islam and many other organised religions, Buddhism in Cambodia makes use of scenes such as these to warn people against the dangers of straying from the precepts of what is morally right in society.

Most visual representations of hell in Cambodia are painted on the walls of temples across the country, but it seems that the artisans who created these images over 30 years ago wanted to be sure that viewers would walk away with a much more realistic representation of the dangers of sinning.