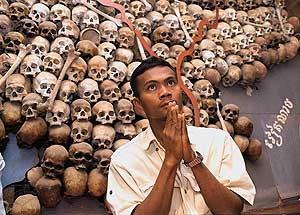 As the Khmer Rouge trials proceed, Mong Hay suggested "the need for the Cambodian people themselves ... to do some soul searching."

Theravada Buddhism, a state religion under the kingdom, the republic, the Khmer Rouge and today's autocracy, is based on three founding concepts: the "dharma" -- Buddha's teachings on right actions and beliefs; the "karma" -- a person's present and future life as determined by his or her own deeds and misdeeds, the sum total of his acts and omissions in all his incarnations past and present; and the "sangha" -- the ascetic community within which a person can improve karma (and become a superior being).

Buddhists who seek enlightenment practice compassion, which is the root of Buddha's dharma teachings. Compassion, kindness, tolerance and forgiveness are the essence of Buddhism.

Cambodia has more than 4,000 monasteries and more than 50,000 monks. Up to 95 percent of the population are Therevada Buddhist.

Mong Hay asked, if "the overwhelming majority of Cambodian people were Buddhist" before the Khmer Rouge's rise to power, "how could these Buddhists among the Khmer Rouge help kill some 1.7 million of their fellow countrymen" from 1975-1979?

"Cambodians need to do some deep soul searching as to how Buddhist they were prior to the Khmer Rouge times, and even in current times, where crimes are no less ruthless," he writes. "Was Buddhism just skin deep, and were Buddhist ethical values -- such as respect for life, loving-kindness and compassion -- not the Cambodian people's strong deep-seated core values as these people might have thought?" he asked.

People in general like to talk. Talking the talk makes some people feel knowledgeable and even pious, and many do this. But walking the talk is less common, for it's harder to do. We "talk the talk" on autopilot; we don't internalize the belief system the words espouse.

More than a decade ago, in 1996, Harvard political science professor Daniel Goldhagen's book, "Hitler's Willing Executioners," stirred controversies about a German mentality containing "eliminationist anti-semitism" that originated in medieval attitudes and developed for centuries. Growing from Goldhagen's doctoral dissertation, which won the 1994 Gabriel Almond Award in comparative politics from the American Political Science Association, the book argues that the ordinary Germans knew about the Holocaust, did not oppose but supported it.

Someone has compared the Khmer Rouge's three years, eight months and 20 days of brutality "as awful and unfathomable as events in Nazi Germany, Stalin's Russia, Rwanda, Yugoslavia and Darfur." Goldhagen's book should provide food for thought for Cambodian historians.

After all, were the monsters Khmer Rouge not among the Cambodian Theravada Buddhists who followed Buddha's dharma teachings? So what snapped? Did Pol Pot have his "willing executioners," in and out of Cambodia, who knew about atrocities, did not oppose them and even welcomed them? Are some such executioners in the government today?

Someone asked, why has Cambodia's Buddhist clergy not spoken out against atrocities, bloodshed and violence, past and present?

Remember there have been Buddhists and non-Buddhists who put their lives on the line fighting Pol Pot since his victory in April 1975.

A few decades ago, I read a Cambodian statesman's political analysis of Khmer history. A nationalist and Buddhist, he wrote of Khmer valor, the Khmer Empire and the builders of Angkor. The Khmer race was "pouch neak chambang" -- a warrior race -- at a time the Hindu influences were paramount. Then came Buddha's doctrine of peace, kindness and compassion to replace the old ways of combativeness and valor, and Cambodia began her decline, he wrote.

I have asked myself since about a "dichotomy" within a person with an inner tug-of-war between the combative warrior personality and the peaceful Buddha-like personality. I was reminded of statues of Hindu gods such as Brahma (Preah Prum), Vishnu (Preah Noreay), Siva (Preah Eysor), among others, in Cambodia's public places -- and not many statues of Buddha.

When I read in another article by Mong Hay, "The history of extremism runs deep," in The Phnom Penh Post of Dec. 7, 2001, that "many of our actions have an extreme aspect" -- he drew examples from social in the family contexts to politics in society -- the thought of "pouch neak chambang" in conflict with the little Buddha seeking enlightenment recurred. Can the conflict be bridged through learning, relearning and unlearning?

The deep wounds inflicted on Cambodians, their culture and society by the brutal Khmer Rouge require no less than justice -- the rendering of what is due to the accused and the victims -- before national reconciliation and healing can be reached.

But the way the Khmer Rouge trials have been conducted put justice beyond reach. Many who manifest the warrior spirit of Cambodia's history may not rest until the accused are thrown in the tigers' den.

Michael B. Ross, an American inmate on death row, writes men can stop the pain and heal only by willing to work for it: "Forgiveness ... doesn't erase what happened, but it does allow us to lessen and perhaps even eliminate the pain of the past. ... It is letting go of the past so that we can move on."