Niigata, Japan -- In Cambodia Buddhism is the state religion, guaranteed by the Constitution, and about 95 percent of the people are Buddhists. However, in recent times, a gradual decline in moral standards among Buddhist monks and the political affiliations of some of their leaders have raised serious concerns. 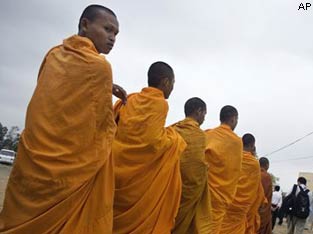 The current Great Supreme Patriarch of Cambodia Tep Vong has been accused of favoritism toward the ruling Cambodian People’s Party. Some of his controversial orders include the February 2005 ban on the use of pagodas for public forums hosted by non-governmental organizations, particularly the Cambodian Center for Human Rights.

Instead of believing that public forums on human rights create chaos, Tep Vong should view them as a platform for people to voice their concerns and appeal to the government to look after their needs. Buddhism supports such a peaceful approach and nonviolent means to highlight problems and seek solutions.

Tep Vong usually makes speeches on political holidays – such as Liberation Day on Jan. 7, the day the former Khmer Rouge regime was toppled – to reaffirm his support to the ruling party. He rarely touches on issues such as moral standards or the role of monks in Cambodian society.

Several reports of monks having sex, watching pornographic materials and other social misconduct have largely gone unnoticed by the supreme patriarch. Recently a chief monk reportedly got drunk and beat some of his followers, who did not file a complaint out of fear for their safety.

Unlike the case of Tim Sakhorn – a monk who was charged with misconduct and defrocked in 2007 for allegedly destabilizing relations between Cambodia and Vietnam – the supreme patriarch has not reacted to the recent issue involving the drunken monk. This shows that the decision to defrock Sakhorn was politically motivated, and that the Buddhist leader is unconcerned about the decline of morality among the monks under his charge.

If such abuses continue, Buddhism will be less respected in the Cambodian community. This will affect other monks who devotedly follow and respect Buddhist principles. Besides, it would create a dangerous society if citizens were to lose faith in their religion, which contributes to people’s behavior and social conduct.

Buddhism has also played a significant role in national reconciliation and peace for survivors of the former dreaded Khmer Rouge regime. Cambodian people are likely to advise their children to apply Buddhist teachings as a way to solve conflicts in a peaceful manner and also to attain inner peace.

Therefore, the supreme patriarch and other monks need to maintain their gracious role and morality so that the religion is respected and valued. Monks should look back on their past roles in developing the community and the country.

Throughout history, pagodas and monks have contributed immensely to Cambodia’s cultural and educational sustainability, despite civil conflicts. However, their roles and contributions are diminishing in present times.

There are many issues like poverty reduction, corruption, social injustice, land disputes and social conflicts that confront Cambodia’s government as well as civil society. Monks should play a greater leadership role by introducing peaceful mechanisms to solve problems. This would go a long way toward helping Cambodians build a better society and future.

--
Chak Sopheap is a graduate student of peace studies at the International University of Japan. She runs a blog, www.sopheapfocus.com, in which she shares her impressions of both Japan and her homeland, Cambodia. She was previously advocacy officer of the Cambodian Center for Human Rights.