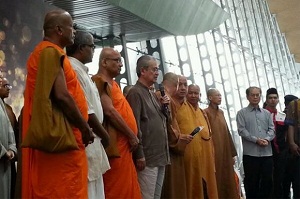 “What has happened is indeed tragic and I am made aware that the search and rescue team, as well as the authorities, are working very hard to resolve this issue.

“Extensive time and work has been put into this and we are all hoping to hear some good news soon,” The Star Online reported him as saying after attending "hajat" prayers at the Kuala Lumpur International Airport (KLIA) today.

Abdullah added that approximately 40,000 people had gathered at the Putrajaya mosque to pray for the passengers and their families.

“Hopefully, all these prayers channel positive energy for the passengers to return safely.

“In the meantime, we ask of everyone to be patient while the authorities find a way to sort this out,” he said.

Following Abdullah's speech, an interfaith prayer session was held for the safe return of the passengers. The session - attended by Buddhists, Christians, Hindus and Muslims groups - was conducted at the KLIA departure hall.

MAS flight MH370, carrying 227 passengers, including two infants, and 12 crew, went missing en route from Kuala Lumpur to Beijing about an hour after taking off from the KL International Airport at 12.41am Saturday.

It should have landed in Beijing, China at 6.30am on the same day.