Buddhist centre to be built in Malaysian administrative capital

PUTRAJAYA, Malaysia -- A national Buddhist centre and houses of worship of other major faiths will be built here as part of the Government’s plan to have a multi-religious enclave at the nation’s administrative capital. 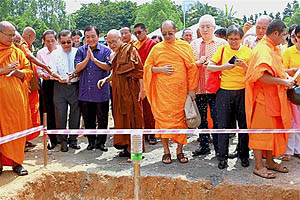 He was present yesterday at the ground-breaking ceremony of Pusat Buddhis Dham­maduta Malaysia at Precinct 20.

The centre, which will be built on a 0.27ha government-owned land, is next to a Hindu temple that is being constructed now.

Named the Devi Sri Lalithaambigai Alayam complex, it will feature elements from temples in north and south India.

Ong called yesterday’s event “a ground-breaking moment” for Buddhists in Malaysia as the national centre would be a “Buddhist capital” for them.

The Government, he said, had also set aside land around that area for other major non-Muslim faiths such as Christianity, Taoism and Sikhism.

About RM8mil will be raised by the Buddhist Missionary Society of Malaysia (BMSM) to construct the two-storey building with a garden rooftop and a built-up area of 1,858sq m.

“It will feature contemporary designs with significant and symbolic elements to showcase the Buddha’s wisdom and compassion in modern times,” she said.

The building, which will also become BMSM’s national headquarters, is slated to be completed by August 2018.

Loh said it would be a convenient place of worship for about 2,000 Buddhists residing and working in Putrajaya.

BMSM was founded in 1962 by the late Venerable Dr K. Sri Dhammananda for the propagation of Buddhism.

It is also a co-founder of the Malaysian Consultative Council of Buddhism, Chris­tianity, Hinduism, Sikhism and Taoism, and is part of other interfaith groups.