Kuala Lumpur, Malaysia -- Ven. Kobutsu Malone and his son, Ryushin will making a week long Dharma tour of Malaysia from January 6 - 14, 2007. The venerables' visit is made possible through sponsorship by the Buddhist Channel. 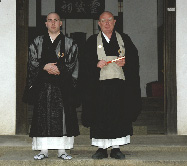 A number of Dharma talks and sharing sessions have been arranged during their visit here. Among the highlights are two public lectures, both titled "Is there heaven and hell" to be delivered at the Subang Jaya Buddhist Association and Kota Kemuning Buddhist Center.

Another interesting sharing will be carried out at the Clove and Clive center (www.clovenclive.com), where Ven Kobutsu is expected to share his vast experience in handling inmate psychology. The participants at the Clove and Clive session will mainly be made up of professional counsellors and those involved in mental therapy.

Ven. Kobutsu Malone, zenji is an American Rinzai Zen Buddhist Priest of the Gempo-Soen-Eido lineage. He was born in Nottingham, England in 1950 and emigrated with his parents to The Bronx, New York in 1957 and later to Paramus, New Jersey. He has practiced Buddhism for over 35 years and has studied with Ven. Eido Shimano, Roshi for over two decades. He has also been a student of Tibetan Buddhism under  the late Chögyam Trungpa Rinpoche.

Kobutsu established the Dharma Song Zendo in Sing Sing Prison in New York State in 1992 and served for eight years as the volunteer Zen Priest at the facility. In 1996 he established the Flowering Dogwood Zendo at the Adult Diagnostic and Treatment Center, a state prison for sex offenders in Avenel, New Jersey. In 1995 he co-founded The Engaged Zen Foundation to foster contemplative meditative practice in prisons.
Kobutsu has been involved in death row chaplaincy since 1996 after serving as spiritual advisor for Jusan Frankie Parker and witnessing his execution by the State of Arkansas. Kobutsu served as the spiritual advisor to Amos Lee King, executed by the State of Florida on February 26, 2003.

The following is the itinerary of the venerables' visit (confirmed as at press time):

Jan 14 --- 10 am: Dharma Talk entitled "Is there Heaven and Hell?" at the Kota Kemuning Buddhist Society.