MALACCA, Malaysia -- Given the rising price of scrap metal, brass urns in Buddhist temples are increasingly being targeted by thieves, with close to 20 temples losing them in the past few months. 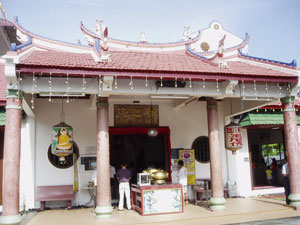 The 87-year-old Seck Kia Eenh Temple at Jalan Gajah Berang here had a 60-year-old urn with a 76cm diameter stolen on Thursday.

“The urn, donated by a devotee, is estimated to be worth about RM8,000 now and is considered an antique,” said temple vice-chairman Joy Chan.

Chan said based on feedback from various temples in the city, close to 20 had had their brass urns stolen, with one losing eight.

“Dealers in second-hand goods should not buy these items, as this will only encourage more thefts,” she said.

In fact, after noticing signs that thieves had tried to steal it on Thursday the 72-year-old caretaker, known as Tai, decided yesterday to replace it with one made of concrete.

According to licensed scrap metal dealer Pong Kim Siew, the price of scrap metal has been going up.

Brass items such as the urns, he said, could fetch RM15 to RM18 a kg now, compared with RM3 to RM4 two years ago.