Kuala Lumpur, Malaysia -- Malaysian Buddhists from around the Klang Valley got together for a luncheon on February 24, 2008 and raised RM 60,868 (US$ 19,020) for BuddhaNET, the world's largest Buddhist web portal based in Australia. 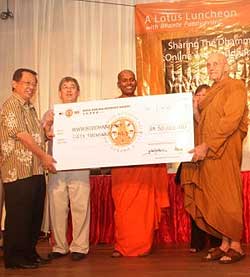 BuddhaNET's founder, Ven Pannyvaro was present to receive the donations. At the ceremony, he expressed his gratitude for the support.

Held at a restaurant in Seri Kembangan near the capital, the customized luncheon (lunch-dana) brought together some of the largest groups in the area.

The main organiser of the luncheon and fund raising event , the  Maha Karuna Buddhist Society said the overwhelming response to the event demonstrated the respect and appreciation of Ven. Pannyvaro and his supporters work to make BuddhaNET to become what it is today.

A spokesman from the society said the luncheon represented a gesture from Buddhists over here who have benefited either directly or indirectly from the vast archives of BuddhaNET.

The amount raised will go to help maintain BuddhaNET as well as to support its eLibrary initiative.

The eLibrary is a Digital Resource Library initiated in partnership with Mahachulalongkorn Buddhist University (MCU) and the International Buddhist College (IBC).

Its aims is to support the free dissemination of Buddhist educational material around the world and the systematic development of Dharma based pedagogy by establishing partnerships with Buddhist institutions.

According to Ven Pannyvaro, the eLibrary follows the principle of 'One Dharma', that is, promoting all Buddhist traditions and the diversity of cultures and languages they represent.

The Maha Karuna Buddhist Society is based in Jalan Bulan FU 5/F, Bandar Pinggiran Subang 2, Shah Alam. It is a non-profit organisation established in 2001, under the guidance of Malaysian Buddhist chief high priest B. Sri Saranankara Nayaka Maha Thera, to serve the needy irrespective of ethnic, religious or social backgrounds.

In 2003, the society established the Maha Karuna Compassionate Home, a senior citizens’ home. The following year it set up the Maha Karuna Buddhist Centre to serve the community in Subang 2, Subang Jaya.

The society’s vision is to conduct Buddhist education and training, implement leadership and personal development programmes, set up a multimedia library and promote social welfare and charity.