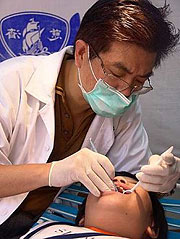 “She started an era of bamboo piggy-banks with the support of only 30 housewives who set aside NT50 cents (five sen) of their grocery money each day.

“While many were doubtful that such a small contribution would be able to help, it was with these funds that Master Cheng Yen embarked on her mission of helping the needy,” he said.

According to Tan, Tzu Chi was introduced in Malaysia in 1989 and has since seen more than 30 branches opened in the country.

“Although the foundation is of a Buddhist background, we provide assistance to the needy, regardless of race, religion or creed.

“We do not only contribute money but also change mindsets and the impact is greater,” he said.

According to Tan, the foundation promotes the spirit of volunteerism.

“The volunteers not only do their part for society but also grow and learn through the process,” he said.

Tan said volunteers also conducted follow-ups to check on those they had helped to see if they needed further assistance.

The foundation has several missions which focused on charity, medical care, education, culture and environmental protection.

“While the patients were initially at the receiving end, they have now become givers as they set aside a small amount for charity.

“This gives the patients a sense of self-worth as they feel that they are also able to contribute to society,” Tan said.

When disaster strikes, Tzu Chi volunteers are ready to provide a helping hand. One example is the Johor floods in 2006, where 6,500 volunteers helped out and provided basic necessities such as medicine, food and clothing.

“In the 1970s, Master Cheng Yen conducted mobile clinics but she found that the main reason people suffer is because the breadwinners fall sick. To solve the problem, she decided to set up a hospital.

“Funding was a problem but she managed to set up the first Tzu Chi General Hospital in 1986,” Tan said.

Free clinics have been set up in Malacca, Kuala Lumpur and Klang as well as three dialysis centres in north Malaysia and a Life Care Home in Sabah, Deserving cases receive free treatment irrespective of race or religion.

There are also two mobile clinics, one at Imbi in Kuala Lumpur and the other at Selayang in Selangor. 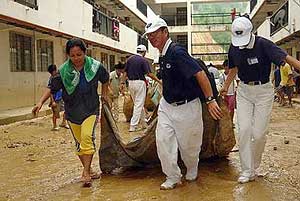 “The mobile clinics will operate once a month in these two areas to cater to the 30,000 refugees in the Klang Valley.

“Aside from basic needs, we also provide them with hot meals,” he said.

He added that in 2005, Tzu Chi signed a memorandum with the United Nations High Commission for Refugees (UNHCR) to provide assistance to the refugees.

To save paper, Master Cheng Yen uses a piece of paper six times. Using both sides, she first writes with pencil, then with pen and lastly with calligraphic ink, as an example to encourage others to conserve resources.

Tan added that Tzu Chi members also had a unique way of eating.

“Tzu Chi members are encouraged to bring their own containers and utensils when eating out to reduce the use of styrofoam boxes.

“After eating, they will pour some water into the plate or bowl and drink its contents. This reduces the usage of dish washing detergent, which will pollute the environment.

“Tzu Chi also advocates vegetarianism not only for health purposes but also for environmental protection.

“Almost everything on the plate can be finished without leaving any bones,” he said.

In Malaysia, Tzu Chi has set up more than 600 recycling points where the recycling proceeds are channelled towards charity.

“It is an experience for many who had to sort out the recyclable items and even do their part for nature,” Tan said.

For more information about the foundation, visit http://english.tzuchimalacca.com/