Mindful of the present

Kuala Lumpur, Malaysia -- RENOWNED Vietnamese Buddhist monk and poet Thich Nhat Hanh, 84, leads retreats worldwide on the art of mindful living. He believes that we can learn to live in the present moment through “mindfulness”, rather than in the past and future. That is his key teaching. 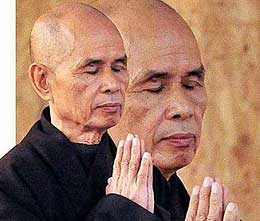 “Dwelling in the present moment is the only way to truly develop peace, both in one’s self and in the world,” said Nhat Hanh, a Zen master and Nobel Peace Prize nominee.

Fondly called Thây (Vietnamese for teacher) by his students, Nhat Hanh, who’s also a peace and human rights activist, lives in exile in Plum Village which he founded in 1982 in southwestern France. In this Buddhist “meditation community”, he teaches, writes and works to help refugees worldwide.

He will be in Malaysia for the first time to conduct a Mindfulness Retreat: The Walk Of Peace And Joy at Tiara Beach Resort in Port Dickson, Negri Sembilan, from Sept 15 to19; a free public lecture entitled This Is A Happy Moment, from 8pm to 10pm at Phor Tay High School at Sungai Dua, Penang, on Sept 21; and a Mindfulness Retreat: Becoming Truly Alive at Tunku Abdul Rahman College, Setapak, Selangor, on Sept 24 (thichnhathanh.my). Nhat Hanh will deliver his keynote address on Living In Harmony: When Things Fall Apart during the World Buddhist Conference at Hotel Istana, Kuala Lumpur, from Sept 25 to 26.

Born on Oct 11, 1926 in central Vietnam, he became a Zen monk at the age of 16 and was ordained in 1949. Nhat Hanh founded the “Engaged Buddhism” movement in which he practises meditation and dedicates his life to helping others. He coined the term in his book Vietnam: Lotus In A Sea Of Fire.

In the early 60s, he founded the School of Youth Social Service (SYSS), a relief organisation in Saigon that rebuilt bombed villages, set up schools and medical centres, resettled families left homeless in the Vietnam war and organised agricultural cooperatives. With some 10,000 student volunteers, SYSS based its work on the Buddhist principles of non-violence and compassionate action.

Despite government denunciation of his activity, Nhat Hanh also founded a Buddhist University, a publishing house and an influential peace activist magazine in Vietnam. He created the (non-Zen) Order of Interbeing in 1966, establishing monastic and practice centres around the world.

After visiting the United States and Europe on a peace mission, he was banned from returning to Vietnam in 1966.

In September 2001, just a few days after the suicide terrorist attacks on the World Trade Center in New York, he addressed the issues of non-violence and forgiveness in a memorable speech at Riverside Church in New York City.

In September 2003, he addressed members of the US Congress, leading them through a two-day retreat. He is recognised for his works with Vietnam veterans, meditation retreats and his prolific writings on meditation, mindfulness and peace. Nhat Hanh has published more than 100 books including more than 40 in English. Among his best-selling works are Call Me By My True Names, Peace Is Every Step, Being Peace, Touching Peace, Living Buddha Living Christ, Teachings On Love, The Path Of Emancipation and Anger.

On long-term exile, he was permitted to make his first trip back to Vietnam in 2005, where he has returned regularly since. He continues to be active in the peace movement, promoting non-violent solutions to conflict.