Singapore -- A $20 million Buddhist monastery will rise up in the north of Singapore in 2017. 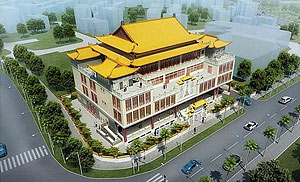 << When completed in 2017, BW Monastery's four-storey complex in Woodlands Avenue 6 will have classrooms, a library, clinic and dormitories, as well as a restaurant, offices and a multi-purpose hall. -- PHOTO: BW MONASTERY

The four-storey complex in Woodlands Avenue 6 will house classrooms, a library, clinic and dormitories for monks and nuns.

It is part of Buddhist society BW Monastery's expansion plans. Established in 2002, the religious group has grown from 150 members to 3,500 members today.

The new building will have a gross floor area of 34,000 sq ft, slightly less than the size of a football field.

It will have a restaurant, offices, a basement carpark with 32 parking spaces and a multi-purpose hall that can fit 700 people.

BW Monastery successfully bid for the land parcel from the Urban Redevelopment Authority earlier this year, after five years of hunting for a site.

"We are glad that we finally got the plot. Hosting Vesak Day for thousands of devotees has been quite a struggle," said Mr Lim Tiong Boon, the monastery's secretary-general.

Apart from government land, the monastery also looked at existing temple spaces across the island.

There are about 130 Buddhist temples and organisations registered with the Singapore Buddhist Federation, and BW Monastery's struggle to find a space for its religious activities is not uncommon in land-scarce Singapore.

Earlier this month, the Government said it would be exploring the idea of multi-storey hubs to house related faith groups that could ease the crunch in future.

For now, BW Monastery has to rent space from clan associations or book road space to hold Vesak Day celebrations - a costly affair that can come up to $50,000 each time.

The group's current headquarters is at Citiraya Centre in Lorong 27, Geylang. It owns two floors there, and rents another two units in two other Geylang buildings.

It conducts 120 religious classes in total, each with about 10 to 20 students. On the new building, Mr Lim said: "Now, we can finally conduct our activities, including major seminars, in a more spacious setting."

The group has plans to develop a diploma programme for both lay people and Buddhist leaders in the next five years as well.

If it succeeds, it will be one of three major Buddhist learning institutions here. The leading one is the Buddhist College of Singapore, which offers a degree and master's in Buddhism in both English and Mandarin.

Mr Lim described the upcoming building as a Buddhist hub in the north, and appealed to the community to contribute to its fund-raising drive. It has raised $10 millionso far.

BW Monastery's Venerable Jing Yuan said: "We want to build a joyous, conducive environment for anyone intent on learning the Dharma to study, contemplate and practice."