Singapore -- CONVICTED Buddhist monk Ming Yi, 48, walked out of the Subordinate Courts a free man yesterday, ending the long-running saga of one of the largest charity scandals here. 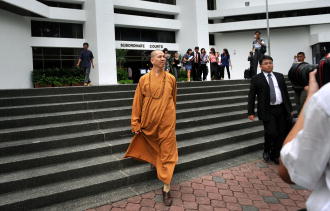 At about 9.15am in Court 18, the founder and former chief executive of Ren Ci hospital had all six remaining charges against him withdrawn.

The charges include forgery for the purpose of cheating, providing the Commissioner of Charities (COC) with misleading information and the misappropriation of Ren Ci's funds.

He turned up in court dressed in his saffron robes and accompanied by his lawyer from Rajah & Tann, Mr Adrian Wong. They smiled and chatted as they sat, waiting for the start of the court proceedings.

In a brief few minutes, the judge granted him a discharge amounting to an acquittal for the six remaining charges pressed against him in 2008.

It is understood that the monk had, through his lawyers, asked the Attorney-General's Chambers to withdraw the charges.