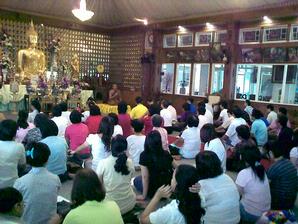 The commemoration commenced at 9 a.m., yet the devotees started to gather at the temple since 7 a.m.

After the puja, those in attendance then will perform a 10-minute meditation leading up to believed to be the moment of the Buddha's enlightment. The moment of Vesak will fall at 11.01 sharp.

Bhikkhu Padipadaro, when delivered Vesak message, urged the Buddhists to always practice Buddha's teachings in a daily life. "Buddhists shall also take an example of Buddha who always served others," Padipadaro said to the Buddhists.