Coming Together 2: One Buddha is Not Enough

Kuala Lumpur, Malaysia  -- VEN. THICH Nhat Hanh is one of the most beloved living spiritual leaders of our time - known to his followers as just Thây  (pronounced “tye”, Vietnamese for “teacher”). The World Buddhist Conference welcomed him to the 2010 proceedings by standing up as one body. He was calmly radiant in his happiness to be there. 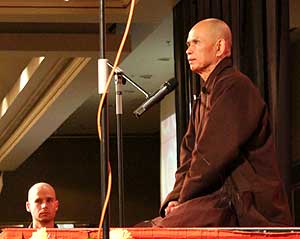 Following a dedicatory recitation of vows, several dozen of his monks and nuns, from his root sangha in Plum Village, France, treated us to a massive, lilting, heartfelt choral chant to Avalokiteshvara, Bodhisattva of Compassion. Then, after a truly sterling introduction by Datuk Dr Victor Wee, Malaysian Tourism Chairman and President of Buddhist Gem Fellowship, Thây took to the platform.

Thây began in his quiet voice by declaring the present moment as a happy moment. He smiled as he then recalled that when he was ordained  at 16 as a novice monk, he was taught how to bow to the Buddha.  He said: “One verse in classical Chinese which I had to memorize went: ‘The One who bows and the one who is bowed to, both of them are, by their nature, empty.’ That is why communication can be very deep.”

After elaborating on this a bit, he went on to typify our century’s thinking as still dualistic:  “We believe there is a consciousness inside, reaching out to understand the world outside.” From this mis-taken view, stems separation: discrimination, anger, hate, violence, and war  -  within ourselves and within the world. That is why we need to go in the direction of Right Thinking, which is the direction of understanding and compassion.

For instance, right now  -  writing, writer, and reader are not independent.  There’s no me without you: in this moment is the proof.  Interbeing is not a word in the dictionary, but Ven. Thich Nhat Hanh has suggested it ought to be.  We inter-are, with each other, and with every thing. Consciousness of this reality is a cornerstone of Zen.

Thây then showed us the Buddha’s central teaching, the Four Noble Truths, from the nondual vantage of interbeing. When we contact our suffering, we contact the suffering of the world. (No separation.)  Recognizing and understanding our own suffering is to recognize and understand the world’s. (Not different.) And, as he put it,  “in understanding a path opens up.” 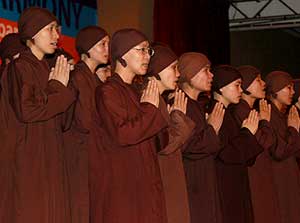 Nuns from Plum Village leading the choral chant to Avalokiteshvara >>

What an elegantly simple way of saying the Fourth Noble Truth of suffering is the Eightfold Path. Having branched off into the Four Noble Truths, and the Eightfold Path, he maintained focus all the while on Right View, Right Thinking, traditionally the initial point upon the Path.

Each sphere or step of the Path “inter-is” with every other.  When we know how to practice right thinking, we can practice right speech and right action. Through right thought we can find healing within our self and within our world. We can transform suffering and produce happiness as naturally as an orange tree blossoms. Yet daily life’s customs and habits try to cover up, avoid, and flee from suffering.

Thây touched on many points, in less than an hour, all framed by his initial point of departure: the present moment as happiness, and nondualism. Since his books are often edited transcripts of his dharma talks, perhaps one reason they invite a very slow reading is this gift he has of speaking from within the experience of interbeing, the interconnectedness of all things, and with a genius for skillful and appropriate means, while keeping everything all on a level.  For example, one moment he offered a graphic but familiar analogy for nondiscriminatory thinking.

Consider your own right and left hand. Your right hand might write or paint, sound a bell or lift a fork, but it doesn’t take up an attitude of superiority to the left hand. When hammering a nail, if our right hand accidentally hits the left, we might cry out, even curse, but left hand does not pick up the hammer to retaliate: rather, the right hand immediately goes to embrace the left hand.  He juxtaposed this anecdote from everyday life with the example of the retreats he’s been organizing for Israelis and Palestinians, where they can sit down together in mindfulness, see past their discriminatory thinking through and deep listening and right speech, and realize harmony and peace together. 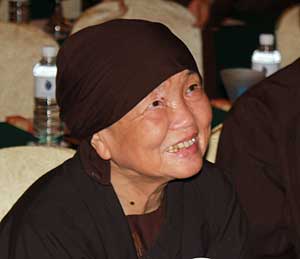 << Sis Chan Khong from Plum Village at the WBC

Along with the wisdom component of right view and right thought, and the meditative art of awareness (mindfulness, concentration, and insight), another way we can train ourselves in the Buddha’s wisdom of nondiscrimination is through the Precepts, the cornerstones of Buddhist ethics (Vinaya). Indeed, traditionally their study and adoption precedes meditation. Thây has always stressed the Precepts  -  which he calls “mindfulness trainings,” since “precepts” sounds like an outside order. For the past five years, with his sangha, he’s been retranslating the traditional first five anew for our time. He spoke with conviction of their being path that can lead us out of discriminating thought, and transform our daily life.

For one thing,  the prohibitive framework of “Thou Shalt Not” is rephrased, so not killing can be seen as reverence for life.  No sexual misconduct can be seen as true love. Loving speech and deep listening are really extensions of not lying.  This extensive relevance of the precepts in our daily lives, individually and collectively, is also elaborated in each. Not stealing also refers to exploitation, social injustice, and oppression  -  negative instincts which can be countered with generosity (<I>dana</I>) and right livelihood. Non-intoxicants opens out into the wider realms of consumption, and consumerism.

Aware of the suffering caused by unmindful consumption, I am committed to cultivating good health, both physical and mental, for myself, my family, and my society by practicing mindful eating, drinking, and consuming. I will practice looking deeply into how I consume the Four Kinds of Nutriments, namely edible foods, sense impressions, volition, and consciousness. I am determined not to gamble, or to use alcohol, drugs, or any other products which contain toxins, such as certain websites, electronic games, TV programs, films, magazines, books, and conversations. I will practice coming back to the present moment to be in touch with the refreshing, healing and nourishing elements in me and around me, not letting regrets and sorrow drag me back into the past nor letting anxieties, fear, or craving pull me out of the present moment. I am determined not to try to cover up loneliness, anxiety, or other suffering by losing myself in consumption. I will contemplate interbeing and consume in a way that preserves peace, joy, and well-being in my body and consciousness, and in the collective body and consciousness of my family, my society and the Earth.

Just a week prior, over a hundred people received transmission from Thich Nhat Hanh of the Five Mindfulness Trainings at his retreat in Malaysia, “This Is a Happy Moment.” Today, Thây invited practice of these mindfulness trainings in families, schools, hospitals, religious bodies, corporations, and political entities. In so doing, he sounded the need for collective awakening, since, to save our planet Earth, “one Buddha is not enough.” 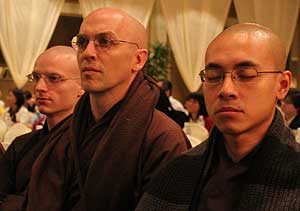 The Sangha from Plum Village in mindful listening mode >>

Many present took that as call for different traditions to continue to come together, as Malaysia is now doing. True, in Thây’s own Southeast Asian, diverse tradition, Theravada and Mahayana intermingle, and with just a dash of Vajrayana. Yet, besides evoking spiritual pluralism (and interfaith) as well as a call for collective awakening, the phrase now also refers to a recent key moment in Thây’s own story, worth relating.  Listening deeply, it underscores the preciousness of his addressing the World Buddhist Conference as part of his last tour of Asia.

Followers of Thich Nhat Hanh are keenly aware of their teacher is now chronologically 84, though he still can evidence the zest of a youngster. Just last year, +1,000 people were gathered together in Colorado for a retreat with him and his sangha, only to learn he was unexpectedly called away to a hospital, instead, due to a lung infection. The retreat had been entitled “One Buddha Is Not Enough” but soon became affectionately known as “One Thây Is Not Enough.”  While his retreats are always billed as being led by Thich Nhat Hanh and the Plum Village Sangha, this time the sangha conducted the retreat without Thây physically there, yet he was present. Some might call it awakening of mind; a collective awakening of mind. One can appreciate in this event the power of the Sangha. And for a decade now, Thây has been saying the Buddha of our time will be manifest as Sangha.

Our initial report referred to the Buddha saying that when two or more people gather in his name, he’d be present.  In that light, one can more deeply hear Thich Nhat Hanh saying for over a decade that in our time the Buddha will be seen in Sangha. Just as he declared we do not need to die to enter the Pure Land - which is present here and now - so might we look to Maitreya, the Buddha of the Future, in our midst, in our coming together.