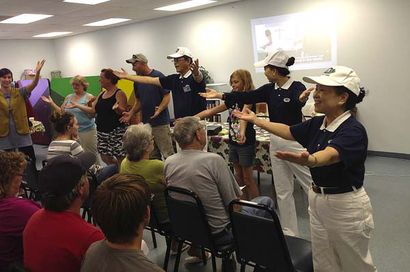 << Members of the Tzu Chi organization perform a song about love and peace on Saturday for flood victims at the Fort Plain Senior Center. (The Leader-Herald/Jason Subik)

On Saturday, the Buddhist charitable organization Tzu Chi, which means "compassion and relief" in Mandarin Chinese, used the flood crisis in Fort Plain as an opportunity to serve the needy by donating approximately $11,000 to 28 families devastated by the June 28 flood of the Otsquago Creek.

Mayor Guy Barton met with members of Tzu Chi, most wearing the group's blue-and-white uniform, on Saturday at the Fort Plain Senior Center.

"This was set up through the Red Cross, to call people whose homes had been condemned or very badly damaged, and this group has funds they are using to help give each of these people some money to help fix their home," Barton said. "This is great - we have 28 families that will receive a nominal amount that could help them buy groceries or maybe hire someone to check out their wiring or furnace and to keep them living in Fort Plain; that's what we are trying to do."

Raphael said Tzu Chi contacted Montgomery County's permanent Longterm Recovery Committee, which was set up in response to Hurricane Irene but has been handling the recent flood as well, and asked the committee for a list of families hardest hit by the flooding.

"We vetted the list through the committee and we determined these were the most needy people. We called them up, and they all have to come today and show IDs and proof of residency," Raphael said.

Tzu Chi provided families with debit cards having either $300 or $500 allocated to them, the larger amounts going to families with more severe damage.

Tzu Chi spokesman Austin Chu said his organization will donate about $15,000 in total for this flooding disaster, with some of the money going to help people living in Oneida County. He said his group, which has its Northeast headquarters in Flushing, Queens, has been active in the U.S. since 1984, when the Taiwan Buddhist Tzu Chi Foundation USA was established.

Chu said his group is not affiliated with any other local Buddhist organizations and has a long history of working with national faith-based charitable organizations to provide relief in disaster situations. In a news release, the group said it provided immediate cash relief to families of victims of the Sept. 11, 2001, terrorist attacks, having donated approximately $2 million among 3,164 families.

George Chang, leader of the Northeast chapter of Tzu Chi, met with flood victims Saturday. He said his group receives its funding through small donations of less than a dollar made on a regular basis by families in Taiwan, and he encourages flood victims, once they've gotten back on their feet, to provide similar assistance to others, either through donations to Tzu Chi or other charitable organizations.

"We call this passing the love forward," Chang said.

In addition to the cash cards, flood victims Saturday also received soft blankets, which almost seemed to be made from wool but were actually made from recycled plastic bottles, as part of Tzu Chi's message for people to become better stewards of the environment. The group also performed a song and dance of "peace and love" for the flood victims.

Flood victims Faye Barber and her daughter Kloie Bowers attended the event and were impressed by the Buddhists.

"This was really a beautiful presentation," Barber said.

Barber and her daughter were flooded out of their home on Abbott Street and have now taken up residence in an apartment owned by a friend. She said her single-family home has sustained too much damage for her to return to it soon.

"There is so much mold and muck, my daughter has to receive breathing treatments every time we go in there," she said. "I'm just a working-class person; I can't even begin to estimate how much the damages will cost."

Barton said New York state is providing individual families with a process to apply for up to $31,000 in relief for damaged homes. The Federal Emergency Management Agency has not yet approved assistance for individuals, although it is providing aid to local governments for flood damage and flood-mitigation projects.

Raphael said another problem facing Fort Plain is landlords who don't have enough equity in damaged buildings to continue bothering to maintain them after the flooding. He said the Longterm Recovery Committee is trying to tap state funding that could be provided for renters to possibly acquire ownership of buildings abandoned due to the flooding.

With tears in his eyes, Barton assured families Saturday that work being done on the Otsquago Creek should prevent future flooding, and he asked them to try to stay in Fort Plain.

Kloie Bowers, who attends Fort Plain Central School, said she hopes she can graduate from the school she has attended most of her life.

"I want to stay here, all of my friends live here," she said.