Dansbury, CT (USA) -- In the five years that Alex Boianghu, a Tibetan Buddhist, has lived in Danbury, he has seen the Buddhist community grow, a reflection of the growth of Buddhism everywhere. 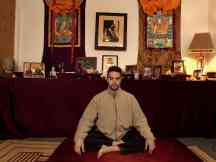 << Alex Boianghu meditates in his Buddhist shrine in his Danbury home. Boianghu is helping to organize a Buddhist retreat that begins today and runs through Sunday in Brookfield - Michael Duffy

"It's really growing throughout the country," said Boianghu, 38, who lives with his wife and 6-year-old son. "I think because it speaks to a very natural way of life. It's not something that you have to believe in. It's really about the view that one has about oneself and one's life. It's a very internal and philosophical view."

A huge percentage of people are disenfranchised with organized religion, Boianghu said. Boianghu also credits the media with helping to spread the Buddhist philosophy.

"Also there has been a lot of influx of yoga in the nation as a whole," Boianghu said.

Although yoga and Buddhism are different practices, they are both eastern philosophies, he said.

Boianghu, who began learning about Buddhism in his teens, is helping to organize a Tibetan Buddhist Retreat to be held today through Sunday at YogaSpace in Brookfield. Lama Orgyen Zangpo will come from California to lead the retreat.

Boianghu said that when he first moved to Connecticut, there were one or two evening discussions a year about Buddhism. Now three or four times a year there are weekend retreats.

Ten or 20 years ago, stores had few books on Buddhism, Boianghu said. Now he said that section in bookstores is "quite large."

Boianghu's home Buddhist shrine, used for meditation, is closed off from his son's play area, where toys are strewn about, by a sliding door.

"That's the way it is," Boianghu said of the life of the modern-day Buddhist. "For 99 percent of the Buddhists in American, it's a lay practice, meaning that we are Buddhists, but we did not grow up with this. For the majority of people, they will be going to work, having children. Buddhism is the support they use to deal with the rest of their lives."

"The dichotomy of my son's toys being strewn all over the place with my meditation room reflects that place that we Buddhists are in in this country. We are in the midst of life," he said. "The chaos in my son's room is not viewed as chaos by a Buddhism."

The family has four graceful cats, who glide about the house and in and out of the shrine area.

Boianghu, a guidance counselor, moved here from California with his family when his wife's mother became ill.

His wife, Kelley, also lives her life based on Buddhist practices and beliefs.

Originally from Forest Hills, N.Y., Boianghu said he "had a yearning in my life about where I was going. I questioned my place and existence."

He read a book about Buddhism when he was 19, and from then on, "I really felt like I came home."

Linda Sparaco of Brookfield, also a Buddhist, will be attending the retreat.

"My life is so much better and enriched," Sparaco said, adding that she is much more calm since starting the practice two years ago.

"It helps me balance,' said Sparaco, who is married, runs a business and has four sons who are in their teens or older.

"It's just been so positive," Sparaco said. "You don't get attached to your problems."

Sparaco was one of the few people who would come to Boianghu's home shrine area in his basement for meditation and study.

But because the group soon grew too large, they now go to YogaSpace in Brookfield. Boianghu and several friends practice together two times a month for three hours at a time.

For more information on the March retreat and another retreat in May, e-mail Boianghu at boianwms@yahoo.com.