New York, USA -- For centuries in Asia, Buddhist monks have meditated among the dead, contemplating the transience and preciousness of life. The practice typically takes place on charnel ground, among bodies decomposing and festering in the open air. 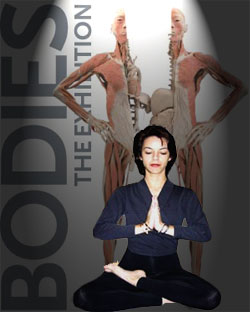 For obvious reasons, the practice has not made much headway among American Buddhists.

"We sanitize death a lot in the West," said Rande Brown, executive director of the Tricycle Foundation, a Buddhist organization.

But visiting the cadaver exhibit, "Bodies ... the Exhibition," upstairs from the Baby Gap at South Street Seaport several months ago, Ms. Brown, a Buddhist who once traveled to India to meditate among bodies awaiting cremation, had a brainstorm.

"It just quickly came to me," she said. "I called the Bodies exhibit and told them, 'I'd really like to do a meditation in your space.' "

So it was on Tuesday evening that about 180 people, spread out across the nervous system and muscular system galleries, settled on to prayer cushions and the bare carpet to meditate for a half-hour among bodies preserved in silicone.

The doors had opened about an hour earlier for people to take in the exhibit. Just after 6 p.m., a cluster of Buddhist monks, in saffron robes with shaved heads, came up the escalator. Among them was the Venerable Bhante Henepola Gunaratana, a diminutive 78-year-old monk from Sri Lanka who lives at a monastery in West Virginia but is visiting New York City. He is considered one of the most prominent Theravada Buddhist teachers in the West.

Ms. Brown rushed over to greet them, careful not to touch them and compromise their vows — the monks are typically not permitted to touch women or money. As she briefed them on the order of the evening's events, they told her they were worried about where they had parked. The Venerable Bhante Heenbunne Kondanna, chief administrator of the Staten Island Buddhist Vihara, a Sri Lankan temple, said he was afraid the lot would close before the event let out.

Ms. Brown said that there was probably nothing to worry about, and soon the monks were wandering reverently through the galleries.

The exhibit, which opened in November and drew criticism from some groups because of the Chinese government's record on human rights — all the bodies were imported from China — includes more than 20 preserved cadavers. They were dissected and arranged in varying poses, including one with a football tucked under his arm and a pair of bodies doing a high-five to illustrate human symmetry.

"You should see the next room," said one monk, urging his brethren ahead to the circulatory system gallery. "It really is extraordinary."

A volunteer nearby assured a different group of visitors about the origins of the bodies. "In most cases, it's an unclaimed body," she said.

A short while later, a disembodied voice intoned over the intercom: "Please make your way to the nervous and muscular galleries for meditation. Meditation will begin in 10 minutes."

Over the last decade, Buddhism has experienced something of a boom in the West among mostly white, middle-class converts who have flocked to meditation classes and spiritual retreat centers. Their version of the religion, however, has in many cases taken on a different look from that practiced in Asia.

Tuesday evening's event was decidedly Western. Other than the Sri Lankan monks and the Rev. T. Kenjitsu Nakagaki, the spiritual leader of the New York Buddhist Church, the others in attendance were almost all white spiritual seekers. Many said beforehand that they had come having no idea what to expect but with a vague sense they were getting a rare and important opportunity.

Many managed to remain motionless throughout; some struggled mightily. A woman leaning against a wall, shifted restlessly. Another man got up halfway through to lie flat on his back.

Hector Cariño, 39, a human resources consultant from SoHo who began dabbling in Buddhism several years ago, sat still for the duration on a black cushion he had brought. Afterward, he said the experience had been profound. "I kept thinking about how complex our bodies are," he said. "In the same way, how frail."

For others, the skinless forms made little impression. Seated with her back against the wall in the next room, Kristin Speranza, 22, a publishing assistant at Tricycle who began to explore Buddhism only recently, said she had struggled to concentrate. "I kind of started to listen to the sound that was being made in the ceiling," she said, referring to the soft whir of the air-conditioner. "I really liked that sound. I got totally sucked into that sound and connected to it."

Because Tuesday, coincidentally, was also Holocaust Remembrance Day, Judy Seicho Fleischman, a Zen Buddhist priest at the Village Zendo in Manhattan and the coordinator of the New York chapter of the Buddhist Peace Fellowship, said she thought about that horrific event, which took the lives of her grandmother's family a half-century ago.

"I felt a healing within myself," said Ms. Fleischman, who also attends a Reform Jewish temple on the Upper West Side of Manhattan. "It's a healing for my family for all those that died."

In the end, a bell rang, causing many to jump and bringing the meditation to a close. The group filed silently through the rest of the exhibit to listen to some talks by the monks who had been invited.

Michael Hershfield, 48, a Jewish software salesman who began exploring Buddhism at a meditation center in Chelsea about eight months ago, said he was impressed by the robed monks, describing them as "hard-core."

"I'm skeptical of robes and garb and things like that," he said, explaining that he had been drawn to Buddhism more for its psychological benefits than anything religious.

But watching the monks and listening to them speak, he said, made him wonder: "Am I doing Buddhism lite?"

By the end of the night, he had no answer.