Buffalo, NY (USA) -- Several hundred UB faculty members crowded into Lippes Concert Hall in Slee Hall on Tuesday for an opportunity to see and hear His Holiness the 14th Dalai Lama in an intimate setting. 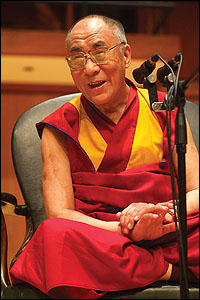 << His Holiness the 14th Dalai Lama answered questions and spoke to a select group of UB faculty members for about an hour on Tuesday in Lippes Concert Hall in Slee Hall.
PHOTO: DOUGLAS LEVERE

The session was billed as a "dialogue" between faculty and His Holiness, and moderator Satish K. Tripathi, provost and executive vice president for academic affairs, urged faculty to keep their questions to one to two minutes, and to refrain from making speeches, drawing chuckles from the crowd.

Seated cross-legged on a large upholstered chair on the concert hall stage, the red-and-gold-robed Dalai Lama told faculty members that he was happy to have the opportunity to exchange ideas and experiences with UB scholars, but that his own knowledge is limited. Although he has spent his lifetime studying Buddhist philosophy and may well be an expert in that field, in other areas, "my knowledge is almost a zero," he said.

"You have every right to ask any question, but I also have the right to say, 'I don't know," he joked to much laughter and applause.

The first faculty questioner asked the Dalai Lama to comment on the lack of opportunities for "character building" and instilling values in secular-based university settings.

"This is one field where I have serious concerns," His Holiness said. "Education is the key for government and society," as well as the basis for a happy family life, he added.

He cited the Sept. 11 terrorist attacks to illustrate his point.

The attacks involved a combination of modern education and sophisticated planning that was "guided by hatred," he said. In that case, knowledge was the instrument used for "destructive work."

How does one become warm-hearted? Through church and prayer, he said, although he advised against relying solely on church and prayer to develop this quality. We must, he said, find "a secular ethics approach, or a universal ethics" approach based on common experience or common sense.

"Modern science shows that positive emotions," he said, "are good for health" and help "balance the brain."

Anger and hatred cause the left side of the brain—the part that governs right and wrong—to malfunction, he said.

"So a person who is compassionate, the left side of their brain is more active, more positive," he said, noting that he frequently jokes that "the leftist view is much better."

"We need more discussion about how to portray in the modern educational system the importance of warm-heartedness; in other words, a sense of responsibility."

Another questioner asked the Dalai Lama if a religion can be a true religion if it sanctions violence.

"All major religions' emphasis involves compassion and forgiveness; a sense of brotherhood and sisterhood," His Holiness said, noting this means that violence is contrary to religious practices.

He explained that throughout history, violence has been used to defend nations' interests, and sometimes the interests of religious faith.

The whole world is now one body, one entity, he said, pointing out that the concept of "we and they" is out of date. "East depends on west, west depends on east, south depends on north, north depends on south—that's reality." The differences of religious faith "are not important," he said.

On other topics, the Dalai Lama:

* Called world overpopulation "a serious problem" and said the best way to combat it is through family planning and birth control. "The best thing is to have more monks, more nuns," he joked. Buddhists view abortion as an act of killing, he said, although he acknowledged that it may be unavoidable under some circumstances.

*  Told faculty members that one must be unbiased to be truly compassionate. Compassion, he said, does not distinguish between friends, family, neutral parties or enemies. "The mind should be objective," he said.