Richard Gere May Have Looks, But the Dalai Lama Has Substance

Washington, DC (USA) -- There is a man who is known round the world, who has become a common household name, and whose face has graced countless TV screens and newspapers. I’m talking, of course, about Richard Gere, star of “Pretty Woman” and People Magazine’s Sexiest Man Alive in 1999. 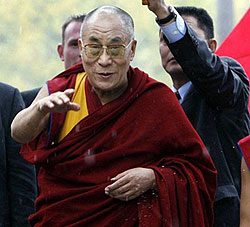 You can imagine my excitement when I learned that Richard Gere, a staunch supporter of Tibetan culture and autonomy, would be speaking at the Dalai Lama’s Congressional Gold Medal Ceremony on Oct. 17. Despite my impending midterms, I decided to take the subway to the Capitol to see this legendary actor in the flesh. When I reached my destination, I discovered that the thousands of people gathered outside the Capitol steps were there, not for Richard Gere, but for His Holiness the 14th Dalai Lama.

It all seemed so odd. In my hometown of Los Angeles, we award actors, set designers, makeup artists and Paris Hilton. Yet the Buddhist monks, college students, and Tibetan exiles who had gathered outside the Capitol that day were not there to see a movie star. They were there to see a man who has practiced a lifetime of nonviolence despite being unjustly exiled from his homeland in 1959; a man who advocates for his people with the virtues of kindness and compassion.

From Senate Minority Leader Mitch McConnell (R-Ky.), to House Speaker Nancy Pelosi (D-Calif), to Holocaust survivor Elie Wiesel, you could not have found a more diverse group of speakers. Though bipartisanship is rare these days, all of these speakers had one thing in common — a deep respect for the Dalai Lama. Even President Bush courageously pledged his unwavering support for religious freedom, becoming the first U.S. president to publicly meet with the Dalai Lama.

This unwavering support for the Dalai Lama is by no means the most popular policy in this country, since China, which opposes Tibetan independence, is one of the United States’ major trading partners. The Dalai Lama has agreed to find a compromise with the PRC by settling for religious and cultural autonomy rather than complete independence, yet China’s communist government refuses even to meet with the Dalai Lama.

In fact, I was given a small cardboard handout which states, “On Sept. 1, 2007, China passed a new law: Order No. 5 states that all Tibetan Buddhist teachers, including the Dalai Lama, cannot be reincarnated without the permission of the Chinese government.” The handout also features a photo of the Dalai Lama with a caption that reads, “Tibetans caught in possession of [The Dalai Lama’s] image face arrest, imprisonment, and torture.” Our Congressmen and Senators may shy away from controversial decisions from time to time, but, by honoring the Dalai Lama with the Congressional Gold Medal, they showed that standing on the side of justice is often more important than cheap labor and the bottom line.

After the medal had been awarded, the politicians began filing out of the Capitol. Then, the moment I’d been waiting for — Richard Gere took the microphone. I gave the star of “Pretty Woman” his due respect, but I found my attention wandering — my eyes were fixed on the center doors as I waited excitedly for my new hero to show his face.

Eventually, a cheer broke out followed by a respectful silence. The Dalai Lama had left the building. He walked down that long flight of Capitol stairs to a jarring sound of Tibetan horns and drums that seemed to echo his strife-filled life of exile. His Holiness did not have the look of a depressed and exiled man. Instead, he exuded a gentle innocence, with a candy-striped umbrella and red visor that kept him cool, and an ever-present giggle and smile that kept everyone else warm.

In his speech he spoke of nonviolence, compassion, and love — words that are not commonly uttered on those Capitol steps in these days of violence, hostility and war. It didn’t matter that he spoke in Tibetan, because some messages, like those of kindness and love, transcend the borders of language (with the help of a translator).

On my subway ride home, I felt satisfied that I would one day have the privilege of telling my grandkids, “I saw the Dalai Lama — the spiritual leader of the Buddhist religion, a hero to the Tibetan people, a beacon of love around the world and a friend of Richard Gere.”