MIDDLETOWN, RI (USA) -- It’s rare to draw close to a figure such as the Dalai Lama in one’s lifetime. But to see him twice? 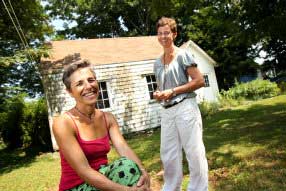 << Rachel Balaban, left, and Kim Fuller, both of Middletown, recently studied with the Dalai Lama. They operate the Wabi Sabi Way, a means to help people access their authentic selves. The Providence Journal / Bill Murphy

In the case of Middletown residents Rachel Balaban and Kim Fuller, it is reality. The two spent nearly a week recently learning Tsong-kha-pa’s text, The Great Treatise on the Stages of the Path to Enlightenment, through Tenzin Gyatso, the 14th Dalai Lama.

The business, which strives to help participants find their authentic selves through accepting that life is imperfect, impermanent and incomplete –– but that there is beauty in imperfection –– offers workshops and retreats that focus on yoga-like techniques of meditation and calming discussions.

The women were hoping to bring back some of the Dalai Lama’s wisdom to their own business, and to discover ways to true serenity.

“I think what’s so neat about seeing the Dalai Lama is it’s not like seeing some god,” Fuller, 42, said. “You feel like you’re seeing someone who loves you.”

The two also attended a public talk at Salve Regina University in 2005, where the Dalai Lama discussed achieving peace within one’s self and the world as a whole. This time they were with him on retreat at Lehigh University in Bethlehem, Pa., July 10-15.

Balaban and Fuller, who have known each other for more than 20 years, have notebooks filled with points that the Dalai Lama made during the week about letting go of material items and working to further one’s mind, the importance of altruism, etc. The two agree it was a life-changing experience.

“There’s such power in it,” Balaban, 50, said. “You don’t realize how big a part you can play in others’ happiness.”

Fuller called the Dalai Lama’s teachings a “ray of hope.” For four hours a day, the two learned Buddhist philosophies along with thousands of others who came for the week, or just for a single session. The roughly 3,000 to 4,000 people that came to the retreat were under strict security –– no cameras were allowed –– but the Middletown residents said the environment was welcoming and loving. Balaban said her favorite time during the six days was when the participants read in unison some of the scripture, blessing themselves and then the Dalai Lama.

“There was just such a kindness, loving kindness, it just gave you hope for the future,” Balaban said. Both women described the readings as “powerful.”

Though the teaching could be tedious at times, the women said they were grateful to be learning during every second of the retreat.

Though Fuller is a practicing Buddhist, Balaban said she was new to the philosophy, and the six-day retreat was an eye-opener for her about how complicated it is.

“Some people were there for the ninth time, and they were just finally getting it,” she said.

One of the philosophies that the Dalai Lama taught was that everything exists because of something else, Fuller said, giving the example of a student and a teacher.

“You can’t be a teacher unless you have a student,” she said.

Another famous philosophy is the idea of combating anger with kindness.

Fuller said, “Ninety-nine percent of the time, their anger has nothing to do with you. Their situation is only temporary.”

But although the teachings of the Dalai Lama are generally Buddhist in nature, he also stresses the importance of “sticking with your own faith,” Balaban said. She said it doesn’t matter what faith one might choose to believe in, but to hold fast to that belief is the most crucial point.

In describing their own beliefs, Balaban called herself a “UUJewBu” –– A combination of Unitarian Universalist, Judaism and Buddhism. Fuller laughed, and said her son once asked if the family was Buddhist, to which she replied, “I am. You can be if you want to be.’”

The two may not fully agree on a religious path, but they both can see the Dalai Lama’s teachings in their business of Wabi Sabi, a Japanese world view that seeks to find simplicity in life, as well as accepting impermanence and imperfections in one’s surroundings.

Balaban said the Dalai Lama’s teachings would give them “better tools” to use in their numerous retreats. One of his sessions revolved around the idea of all sentient beings being relived of suffering because they’ve found happiness, which can spread further when one helps them to relieve their suffering.

Fuller gave an example of the suffering she sees among women. “There’s a perception, especially among women, of perfection,” she said. “And it just can’t be done. The only thing you can change is your own mind, your thoughts,” not your condition or your surroundings.