New York City, USA --  During his address to the Tibetans living in New York and New Jersey areas, the Dalai Lama took the opportunity to send a message to people inside Tibet not to take desperate acts under depression. 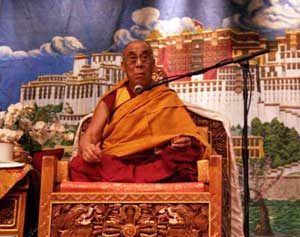 << His Holiness the Dalai Lama at the WAMU theatre, Madison Square Garden, NYC, May 3, 2009, photo/Sonam Wangchuk

“Please do not go under depression because of the current situation. We do not have to be cowed down,” the Tibetan leader said.

The crackdown in Tibet by the Chinese Government has been intensified since last year. Under such circumstance and atmosphere, the Tibetan leader said, many Tibetans undergo depression and some even resort to suicide.

“The Tibetan situation now is at live and death case. The Chinese policies are designed to do away with Tibetan identity and culture,” the Nobel laureate said. “But the truth will never go away.”

Recalling a conversation he had with a recent arrival from Tibet, the Tibetan leader said that the more the Chinese suppression the stronger the Tibetan spirit of resistance grows.

However, the Nobel laureate said that Tibetans should never give up the non-violent path because truth shall prevail. His Holiness also stressed the importance of education, which will “enable Tibetans to take responsibilities”.

In his remark to the audience gathered in the WAMU Theather, the Dalai Lama said that Buddhism is the backbone of Tibetan culture and way of life. “But there is a possibility that Buddhist culture may diminish unless an attempt is made based in its value.”

Many people including Tibetans are attracted to “popular Buddhism” which he defined as carrying rosaries and displaying expensive images of Buddha and Bodhisattvas without true understanding of the philosophy.

“Rosary is useful in counting money,” the Dalai Lama said laughing aloud. “Real Buddhist practice is transformation of mind.” While popular Buddhism is “cheap and not good,” the true and genuine practice is possible “by using the critical faculty of the mind.”

His Holiness urged Tibetans to engage in debate amongst themselves about Buddhism in their homes and to speak to their children in Tibetan.

The talk was organized by Tibetan Community of New York and New Jersey and was attended by about five thousand Tibetans and other ethnic groups from the Himalayan belt.
TOP