Buddhist politician: Why Curren changes everything

Waynesboro, VA (USA) -- A recent candidate for the 20th District in the Virginia General Assembly, Erik Curren, has been revealed to have some Buddhist leanings. A simple internet search could have revealed this information to his constituents. He even authored a book called “Buddha Isn’t Smiling” in 2006, expounding on perceived corruption in the Tibetan leadership because of the naming of two competing successors to the Kagyu lineage, a long line of reincarnated Tibetan leaders. 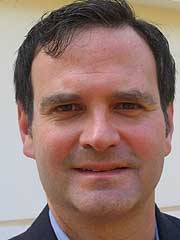 While that dispute is not at issue here, the obvious personal take on the situation described in his book indicates that he does indeed have Buddhist leanings. The book was published under his real name, which should absolve any concerns some may have about him possibly concealing his beliefs, or at least not fully disclosing them.

His website states that he attends a Methodist church, which is not surprising. It is not unusual in the U.S. to be both a Buddhist and of another religion, since Buddhism holds no prescribed thinking on the matter of the existence or non-existence of a creator/god.

These matters aside, it begs the question of the relevance of religious faith within politics. In the United States, it has become a forgone conclusion that without stating faith of some type, you can’t get elected to office. As undemocratic as this is, this status quo has been maintained practically since the conception of our Union. This is troublesome because stating faith does not necessarily mean that one follows the ethical guidelines of the professed religion, as is proved in the frequency of exposed scandals amongst all political parties.

Within a large and diverse population, the average American wants a simple benchmark by which to measure the ethical limitations a candidate will place on his opinions and actions while acting as a member of our government. Most often, the benchmark used is religious beliefs, being the most accessible information that many people have in common with a candidate.

This has devolved our educated process of electing officials based on policy into a demand that all candidates profess to be of some major religion in this country, as if by doing so gives that person more probable skill for the job at hand. Instead, an examination of facts about past actions and probable future actions, based on demonstrated morality, should be in order.

Some confusion is further generated because of recent interchangeable use of the terms “ethics” and “morality”. In truth, the word ethics represents the ideal standard of conduct, but morals are the demonstrated acts performed by the candidate based on those ethical standards. Ethics are the rules accepted by a given group, and morals are the actions taken based on (or despite) ethical guidelines. This is why there are both good and bad morals, but “ethical behavior” is always assumed to be good. Morals, by this definition, are much more revealing than professed faith. Being Christian, for instance, seemingly indicates a standard position on a host of issues. However, any student of theology can tell you that this is not an accurate point of reference to determine whether a candidate will probably act morally, in accordance with commonly accepted ethics. Even within a given religion, the varying branches can differ so greatly on key points of doctrine that they have killed to resolve the conflict, as has been long demonstrated in the Protestant-Catholic conflict in Ireland.

When Clinton’s Lewinski scandal was unearthed, it was not only the breeching of the ethical guidelines for the President of the United States that bothered the objectors, but the fact that he had lied about it under oath before a Grand Jury, which demonstrated a moral flexibility unsuitable for someone holding such a highly esteemed office. Our political leaders being supposedly held to a higher standard of ethics, it gave his opponents all the clout needed to press an impeachment. Our political leaders are wallpapered with the trendiest platforms and viewpoints in an effort to please (and appease) the general population, which means that their real motives (good or bad) are largely unknown. It would create more resilience for their public image and allow for more positive change within the system if they actually became the role models they claim to be. This used to be the status quo- watch the original 1950's production of Born Yesterday with William Holden (and try not to laugh during the final scene).

This holds true for all people in the public eye who claim to believe in something. If, in recent years, a person claimed to believe in “family values", a long record of divorce would belie that claim based on the current ethical standards of the marriage-based family. A value is a determination based on comparison (i.e. the value of the dollar is determined by comparison to the yen), which indicates that the value of family is a relative issue, but again, with recent use the meaning of this term has been altered to represent a more static concept. The values being spoken of are assumed to be true, instead of having a relative worth to each person. To illustrate this further, it would be the same if someone asked what the car you are selling is worth, and you answered that you firmly believe in good cars.

Unfortunately, “ethics” and “morality” and “values” have become such buzz words that most people only see their feelings about them and don't bother to examine the person saying them. Knowing the attachments that most people have to certain words and concepts and working them to their advantage (“spin”) has become an industry of its own in the last ten years. It has also revolutionized the way we view politics, and not necessarily in a good way since it involves manipulation.

Of recent times, scandal stems not from the fact that we believe our politicians should be unblemished human beings, an impossible standard, but that the people involved have exposed themselves as hypocrites by professing to believe in a set of doctrinal beliefs without actually taking on those precepts in their personal lives. In a nutshell, the officials in our government need to practice what they preach. “The truth will set you free.” John 8:32 (NIV).

If Erik Curren really is a practicing Buddhist, that’s no bad thing- for what it’s worth. His volitional actions need to prove it first, and millions of American Buddhists are watching. Hopefully, the increased pressure from his peers will encourage an even better practice than he may already have developed. All politicians should come "out of the closet" about their real beliefs like Curran has. Metta to you, Erik Curran, and do us proud.