New York, USA -- All Army chaplains wear the same uniform, and all of them answer to the same calling: to provide comfort and to relieve the suffering of American soldiers. 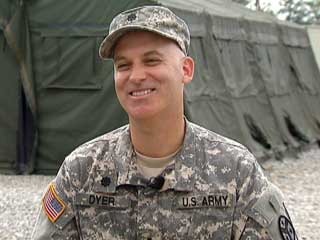 << Chaplain Thomas Dyer is the first Buddhist chaplain in the U.S. Army's history. He will be commissioned to Iraq in December.

But one chaplain stands out from the crowd. Thomas Dyer is the first and only Buddhist chaplain in the history of the U.S. Army.

Dyer will be deployed to the Middle East in December along with the 278th Armored Calvary Regiment. Although his faith is grounded in pacifism, the 43-year-old Dyer says war has become a necessary part of peace.

A former Baptist preacher, Dyer found his new faith a few years ago through the practice of intense meditation. Born in Nashville, Tenn., he says his Christian background gives him an advantage in meeting the demands of a military with diverse spiritual needs.

“It has made me kind of like someone who is bilingual, where they can speak two languages, or bicultural,” he said. “I am kind of like a bi-religious person, so I am able to make connections with soldiers in a way that is very familiar to them, so I don’t look so scary or ... strange.”

Less than one percent of the United States population is Buddhist, and Buddhists make up only three-tenths of a percent of the military. But Dyer has quickly gained the respect of his Christian colleagues, who make up the vast majority of military chaplains. He has also fostered a close relationship with his chaplain assistant, Spc. Jonathan Westley, who's trained specifically to protect him.

"It definitely was something different when I got to meet him for the first time last year,” Westley told Fox News. “Fortunately, we clicked right from the start."

Dyer will be a spiritual guide to all soldiers, not just Buddhists. He says no matter what their faith, all soldiers at war have common spiritual needs.

"They have a lot to bear. The training is tough. The environment is rough at times ... and as a result of this they will come to someone who wants to help," he said.

Religion aside, he says, soldiers face death daily, and what matters most to them is that someone who knows what they’re going through cares about their fate.