LOWELL, Mass. (USA) -- During Buddhist monk Ly Van Aggadipo's final days, he wrote often in a notebook. Temple followers knew the nonagenarian spiritual mentor to many local Cambodian refugees was recording some sort of personal history, but they weren't sure what. 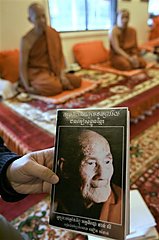 << In this Nov. 20, 2008 file photo, Samkhann Khoeun holds at the Glory Temple, in Lowell, Mass., a Khmer language manuscript of poetry by the Buddhist monk Ly Van Aggadipo that features his photo on the cover.

"He told me, 'When I'm gone, make sure others read this so people don't forget what happened,'" follower Sokhar Sao said. "I didn't really understand until he was gone."

Next month, friends and followers will release a book of poetry by Ly Van, who survived the brutal communist Khmer Rouge regime in Cambodia and later led the Glory Buddhist Temple in Lowell from 1988 until his death in January 2008. The book, entitled "O! Maha Mount Dangrek," is a collection of two lengthy poems: one an autobiographical piece on the horrors of the Khmer Rouge, the other about a friend's story of love in the time of genocide.

The title in English means "Oh Mighty Mount Dangrek" and refers to the mountainous plateau between the Cambodia-Thailand border that refugees were forced to climb in order to escape the Khmer Rouge regime.

Organizers plan a 14-city tour to promote the book with readings and accompanying musical performances by two young Cambodian artists. The tour will begin April 1 at a Middlesex Community College reading in Lowell and continue with stops in Chicago, Philadelphia, St. Paul, Minn., and Long Beach, Calif.

The publication of Ly Van's work, printed in its original Khmer and in English, completes a two-year project by followers. The day he died, a follower found the poetry tucked under stacks of old Buddhist texts inside the temple.

On worn pages were handwritten, carefully crafted poems describing Ly Van's memories of labor camps, starvation and infant executions and his dreams of escaping to America.

"We all said, 'Wow ... we have to publish this,'" said Samkhann Khoeun, who studied under Ly Van and served as the book's editor. "Here was something so beautiful describing something so horrible. It brought tears to our eyes."

Khoeun then went on a campaign to get the book published. The Glory Buddhist Temple and local nonprofit groups Light of Cambodian Children and Cambodian Expressions agreed to help with the publication cost, while Khoeun worked on translation with other refugees.

Ly Van was born in 1917 in a small Cambodian village where he and his family lived through the 1970s rule of the Khmer Rouge regime, which perpetrated one of the worst genocides of the 20th century.

An estimated 1.7 million people died from starvation, disease and executions due to the group's radical policies. According to the temple's biography of Ly Van, he was forced to work on farms and public projects 14 hours a day. It was during this time that he witnessed mass executions and large-scale starvation.

In early 1979, when Vietnamese soldiers invaded Cambodia, Ly Van and thousands of others fled to Thailand through dangerous terrain where he and others ended up at refugee camps while hoping for asylum to the U.S. with the help of the U.N.

He and his family were granted asylum and resettled in Lowell, an old mill city less than an hour's drive northwest of Boston.

Today about 20,000 Cambodians live in or around the city, making it second only to Long Beach for the largest number of Cambodians living in the United States.

As a refugee in Lowell, Ly Van helped establish the Cambodian Mutual Assistance Association, which promotes educational, cultural, economic and social programs for Cambodian-Americans and other minorities, before leading the Glory Buddhist Temple until his death of old age at 90.

But while counseling his fellow refugees and performing volunteer efforts, Ly Van quietly worked and reworked his long poems about horrific moments in his life that he rarely shared.

Besides the epic poems, the new book also features photos of Khmer Rouge-era Cambodia and of refugee camps in Thailand.

Some of the photos are from the collection of photojournalist Jay Mather, whose images helped earn him a 1980 Pulitzer Prize for international reporting with reporter Joel Brinkley while at The Courier-Journal newspaper of Louisville, Ky. Others come from refugees' personal collections and the Documentation Center of Cambodia, which has documented Khmer Rouge atrocities.

Sao, who has a bullet wound on one of his calves from being shot at a refugee camp, agreed.

"It's painful to see and remember," said Sao, also 47. "Every time I hear the words Khmer Rouge I get a little emotional. So you can imagine what's going on when I read this poetry and see these images."

Around 3,000 copies of the book are planned for the first printing, with proceeds going to costs for a planned second printing, Khoeun said.

The goal is not to make money, Ly Van's followers said, but to share the story of Cambodian refugees with others.

"I think my own children don't believe what we went through to get here," said Sao, a father of four children who were born in the U.S. "I don't talk about it much and can't put it into words like this."