Blount County, TN (USA) -- Two American Buddhists' journey around the world recently landed them in East Tennessee, after they were charged by their teacher to open a retreat center in Blount County. 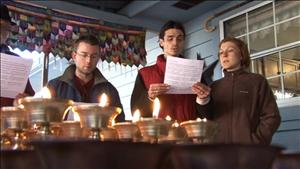 They celebrated the effort with a bulb planting at the site Sunday afternoon.

The retreat is nestled in the hills of Blount County's Happy Valley.

The 30 acres of land will one day hold about a dozen private retreat cabins, if all goes according to plan.

The cabins will be available for solitary or group retreats, according to Lama Samten.

Lama Samten and her husband Lama Karma will teach workshops on meditation and Buddhism to help fund their efforts.

Lama is a Tibetan word that loosely translates to teacher. The Americans adopted Buddhist names while participating in three year, three-month solitary retreats.

In the meantime, they'll live on the site in the home of University of Tennessee professor and fellow Buddhist, Jeffery Davis.

Davis says he plans to dedicate the land to M.O.C.D -- an acronym for the retreat's Tibetan name, Milarepa Osel Cho Dzong.

The lamas hope to have the cabins built within five years. They also hope to construct a stupa, which is a traditional Buddhist structure.

"Originally it was used as an object to enshrine great teachers and an object of veneration," explains Karma. "It's a focal point so it can draw [Buddhists], it serves as a common center. And for people who are not Buddhist, it still has magnetism."

The retreat will be open to people of all religions seeking to engage in contemplation and meditation.

Samten explains that one of the basic tenets of Buddhism is the aspiration to stop suffering, which can be achieved in part through introspection.

"If we can share that by creating a space for people to explore that, the nature of their minds, that would be the best thing I could have imagined doing with my life,"says Samten.