Atlanta, GA (USA) -- Chungtsang Rinpoche, 47, is a senior lama at the Tibetan Buddhists’ Drepung Loseling Monastery, in Mundgod, in southern India. He is originally from the Kham region of Tibet, and has been on a cultural tour of the United States with the Mystical Arts of Tibet program. 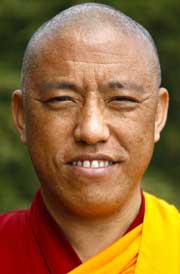 << Chungtsang Rinpoche, 47, is a senior lama at the Tibetan Buddhists’ Drepung Loseling Monastery, in Mundgod, in southern India. ADAM JENNINGS

In September, the group spent a week in North Carolina at Wingate University. The tour was arranged by the Drepung Loseling Monastery in Atlanta.

We spoke through an interpreter.

Q: What is the daily routine where you live?

At the monastery, people take classes and study. I completed mine; it took 25 years.

I teach in the morning, and meditate and pray. I also join in the debate about the study of Buddhist philosophy.

Q: At Christian monasteries, members often live apart from the world. Is it like that in Mundgod?

It’s like that. We are separated from the town. The monastery becomes home for the monks, who receive an education there – philosophy, the science of the mind and emotion – to learn to deal with the positive side of things.

Where monasteries can be located is slightly different in Tibet. In India, the government chooses the location. Some monasteries are inside or within sight of a town.

The monastery buildings are the same as in America, in that there are huge halls for group prayers. At our monastery in India we have 3,000 monks. The monastery has 25 chapels in separate buildings. The monks have their own rooms where they eat or sleep. The entire monastery is very large.

Q: What do they eat at the monastery?

It depends on what is farmed. The Indian government gave us huge fields for crops like rice. The diet is also based on donations from people. Because of the weather – like if there isn’t good rain – there can be problems with what is raised in the area. Then we get help from the Tibetan government in exile.

We are vegetarian. The food is rice and maize (corn) and vegetables.

Q: Do you have visitors there?

Yes. They come to see friends and relatives. Some come to pray and meditate. Our monks originally from Tibet have fewer visitors than those born in India.

We also have many visitors from the United States and Europe. Tourists come to see what we look like. American Buddhists come to study and train in our meditation method.

Q: How old were you when you left Tibet?

I was 13. The culture, the language, the food, the climate and the land are all different. Some who escaped from Tibet deal with health problems and difficulty getting used to the climate and have to return to Tibet.

Q: Do India and especially the United States strike you as exotic?

There are other differences between India and America. The first time I came to the United States, I didn’t see anyone outside – which is very much unlike India. I saw the shopping malls and thought no one was allowed to go outside! Now I am used to them.

Q: Right now, you’re wearing a sleeveless, collarless maroon cassock. Is that what you ordinarily wear?

Yes. It is part of being a monk.

Q: You’re also wearing eyeglasses and a wristwatch. Do you wear these at the monastery?