Stanley, VA (USA) -- The Buddhist monks emerged from the shrine dressed in colorful garments and striking masks. As the low hum of a drum sounded and the high-pitched clatter of cymbals rang, the monks took their positions in front of the audience and performed a sacred dance to expel doubts and strengthen aspirations. 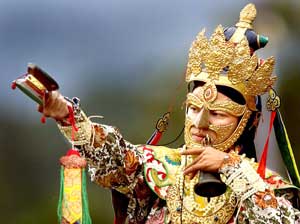 << A Buddhist monk from the Mindrolling Monastery in India performs in the Lama Dances on Saturday during the Lotus Garden inaugural celebration in Stanley. Photo by Pete Marovich

The dance, known as a Lama Dance, is a meditation in movement that transcends a spiritual message to others. In this case, the monks, who traveled from the Mindrolling Monastery in India to take part in the Lotus Garden Inaugural Celebration, were passing a message of blessing and enlightenment to those who had gathered for the event.

The inaugural celebration served as the Lotus Garden’s formal dedication as a Tibetan Buddhist practice and retreat center.

The garden, formed about two years ago on a 200-acre farm in Stanley, serves as a center to meditate and study and practice Tibetan Buddhism. Although the type of Buddhism practiced is primarily Nyingma and Kagyu, its land and facilities are open to teachers and practitioners of all Buddhist lineages.

Buddhism centers on compassion for all beings and clarity of true nature. "All sentient beings want happiness, not suffering," said His Eminence Kochhen Rinpoche of the Mindrolling Monastery in Tibet.

To achieve this happiness, Buddhists believe that people must let go of themselves and focus on what they have in common.

Buddhism has been practiced around the world for more than 2,500 years, but has been taught in the West for only about 50 years.

To help educate people about Buddhism, Locust Garden opened its inaugural celebration to the public, allowing guests access to the property and different events throughout the weekend. With the help of the monks of the Mindrolling Monastery and several prominent Tibetan Buddhist figures, the celebration was a blend of Eastern and Western cultures.

The drum pounded and the monks danced in the cool autumn air while audience members watched from their seats. When the beat stopped, the monks made their way into what was once the farm’s equipment shed to prepare for the next dance.

Through huge sliding doors, the monks entered what from the outside still resembles a shed but on the inside is a Buddhist shrine adorned with brightly colored fabric and giant pictures the Buddha, the Dali Lama, His Holiness Mindrolling Trichen and Padmasambhava.

As they removed their masks and changed costumes for the next dance, the monks walked around the rows of pillows and low tables that they set up in the shrine earlier in the week. They had spent many hours in the shrine, chanting, meditating and learning during their visit.

The shrine also was open to the public during the celebration.

Amy Ritchie, 31, of Richmond, was one of a few guests who sat in the shrine and watched the monks create a sand mandala, a two-dimensional representation of the universe made with several different colors of sand.

Ritchie said she enjoyed the garden’s serene atmosphere and the company of the monks. "It’s just so beautiful," she said. "It just sets you up for just being kind of calm for a while."