Nashville, TN (USA) -- Struggling with his father’s sudden death and curious about Eastern philosophy, Hunter Armistead followed a voice that led him halfway around the world to a Buddhist monastery perched on Nepal’s Kathmandu valley. The two-week trip to study the Dharma, or Buddhist teachings, turned into a three-month sojourn of prayer and meditation. 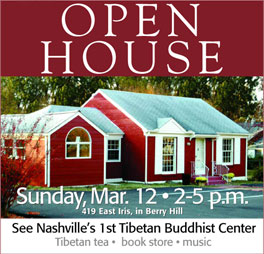 “The instant I walked through the gates of that monastery, I knew I was where I was supposed to be,” Armistead said. “I experienced a calmness and awareness that I had not experienced before.”

When Armistead returned to his Green Hills home, the musician/photographer and scion of a prominent Nashville family resumed his work by joining Nashville’s nomadic Padmasambhava Buddhist Center, which practices the teachings of Buddhism according to the Nyimgma school of Tibet. Without the money or resources for a place of worship of their own, a few faithful met several times each week, alternating between homes and rented spaces.

Now, nearly 18 years later, the organization’s days of hauling around a “Buddha bag” filled with statues and other worship accoutrement used to erect a temporary shrine are over. Over the past three months, the group purchased and refurbished a modest red brick house in Berry Hill and opened middle Tennessee’s first non-immigrant Buddhist center.

Named for a female historical figure who helped Buddhism become established in Tibet, Yeshe Tsogyal Dharma Center is hosting an open house 2-5 p.m. Sunday. The event is free and open to the public and will feature explanations and discussions on Buddhism, organizers who can answer questions, music, chanting and Tibetan tea.

Buddhism, a philosophy/religion created over 2,500 years ago by Siddhartha Gautama, who later became known as the Buddha, is founded on the belief that one must rise above desires to reach a state of enlightenment.

“If you haven’t been able to find something that makes sense, or able to find a satisfying explanation of how the heart and mind work, I would encourage someone to come to get a taste of our community, and the environment where we practice,” Armistead said.

Since opening their doors, the weekly attendance has more than tripled from 30 to 100 members, Armistead said. He attributed this not only to the new center, but also to the growing popularity of the Dalai Lama in the United States and the regular visits by the Khenpos, two Tibetan Buddhist lamas who serve as the organization’s non-resident teachers.

Newcomers are also invited to attend weekly meetings at 11 a.m. on Sundays.