Laotians ring in the new year

Parade is highlight for many at event in Murfreesboro

MURFREESBORO, Tennessee (USA) -- The language of laughter, good will and good food was spoken here yesterday during the Laotian new year celebration. And not a jot of meaning was lost in the translation. 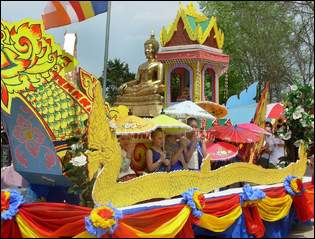 << Children sitting beneath the Meditating Buddha symbolize innocence, according to a member of Wat Lao Buddharam Laotian Buddhist Temple. Several floats made their way around the temple as part of the Laotian new year celebration in Murfreesboro.  (LOUIS MEDINA)

The Wat Lao Buddharam Laotian Buddhist Temple on Old Nashville Highway was host to a constant stream of people who arrived from all over the country and the world for the festivities.

"Everyone is welcome," said Sam Sanouvong, who is on the temple's board of directors. "(The festival) is not just for Laotian people."

Indeed, the ringing in of Laotian new year 2549, according to Sanouvong, was truly an international event with participants of numerous racial groups and nationalities.

Maesa Chulirashaneekorn of Texas is a 21-year-old junior finance major at Middle Tennessee State University. He has been attending the celebration for as long as he can remember, he said. "I like the food, the atmosphere. I come here to pray also — for good luck — because it's the new year."

Tyrone Schneckloth, 27, and his wife, Lasilia, 24, were there with their daughters Tranesha, 10, and Danielle, 6. A cousin, Destiney Bryant, 6, was also with them.

Schneckloth said he heard about the celebration through Laotian friends from the Asian Basketball Tournament, in which he participates. He said he and his wife had their daughters in mind when they decided to attend. "It's for the kids," he said. "They get a chance to see another culture."

Tranesha's motivation for being there seemed a bit simpler: She likes the parade, she said.

Jen Frey, 20, who was showing off a traditional Laotian outfit, said she was there "because my boyfriend is Laotian."

Like Frey, many of the women, Laotian or otherwise, shaded themselves from the bright spring sun under colorful paper and bamboo parasols.

Mark Warf, a detective with the Rutherford County Sheriff's Department, said he has been providing security for the event for the past six years. He said attendance is "usually easily in the thousands.''

"People come from all over the country," Warf said. "They support the temple when they do that."

According to Sanouvong, Wat Lao Buddharam has been the focal point of Laotian cultural life in Murfreesboro since it was built in 1982. The temple boasts about 800 members, he said, but if you also count the people who come and go, total attendees number about 1,000.

The new year's celebration, also known as The Washing of the Buddha, has different meanings in the minds of the Laotian people.

It is also a time to apologize to others whom one may have wronged in the old year, Luong said. Children are usually encouraged to apologize to their elders at this time, she said.

Others, like Ya Tongkam, 36, a toy vendor, said people like to pour water on one another to cool off because the festival happens to fall in mid-April, when it's really hot
in Laos. "It's so hot, over 100 degrees," Tongkam said. "So the people walk by the houses and they just throw water on them. But it's different here. We're supposed to throw water, but we don't do it here. In the old country we do it," he said.

Children, however, always get into the water action, Tongkam said. Water guns are a "big order item," he said.

Entrance to the temple itself was free, but it cost visitors $10 to enter the open-air food stall and shop area. Food stalls featured enticing marinated and barbecued meat dishes, noodles, spring rolls and other festival foods. Shoppers were able to purchase anything from toys and stuffed animals for the kids to jewelry to traditional clothing to Laotian music CDs to straw baskets for steaming rice.

"It's a beautiful thing seeing people get together," said Jimmy Charousapha, 22, a second-year electrical engineering student at Nashville State Community College who identified himself as a Laotian-Vietnamese born in California. He said he visited Laos four years ago for about two weeks, and the authenticity of the food, shops and festivities in the Murfreesboro Laotian new year celebration was "pretty authentic."