Dr. C.T. Shen, one of the world's most compassionate men

Putnam County, FL (USA) -- On the first anniversary of his passing, more than 250 followers of the Buddhist Association of the United States gathered Sunday at the Chuang Yen Monastery in western Kent to commemorate his life while rejoicing about the good Dr C. T. Shen fostered during his 94 years. 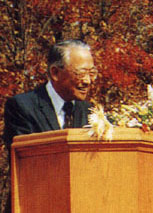 Shen, born in China, was a successful businessman in Shanghai. He emigrated to the U.S. in 1952 and established a shipping company.

In 1980, he donated a 125-acre parcel of land to the Buddhist Association that became known as the Chuang Yen Monastery, home of the Great Buddha Hall that houses a 37-foot tall statue of Buddha Vairocana - the largest Buddha statue in the western hemisphere.

During Sunday's ceremony, family and friends recalled that, ever since his youth, Shen was "spiritually drawn to the Buddhist teachings of personal cultivation toward enlightenment and compassion for all sentient beings."

Putnam County Executive Robert Bondi remembered Dr. Shen's hope to "bring about world peace while alleviating the suffering of mankind."He dedicated his life to the cause of promoting friendship and mutual communication among all religions while introducing the concept of Buddhism into the Western world."

The Rev. Ming Kwang, former president of the Buddhist Association of the United States and Abbot at Chuang Yen Monastery, recalled his friend as a "kind and great man who had marvelous wisdom and living kindness.

"Dr. Shen viewed all people as one and enjoyed welcoming thousands of people to the monastery - the famous, like the Dali Lama, were greeted with the same respect as local people who visited."

In his memoirs, Shen reviewed his life: "My hope is to benefit all human beings and to work toward freeing them from fear. Introducing wisdom into daily life is my devotion of energy. If I succeed in this endeavor, my life will be successful."

Over a 25-year span in many interviews with this reporter, Shen stressed that people should never walk alone.

"Whether one's faith results in Kuan-Yin or some other deity, faith must be kept alive. I tell my followers to 'respect your faith as well as the faith of others,'" he said in a previous interview.

Judging from the thousands of people who visit the monastery each year, Shen's legacy remains.

Sunday's special program also commemorated the death of the Buddist Association of the United States' Emeritus Xian-Ming who also passed away in 2007.