Instructor shares his own path at northwest Dallas meditation center

Dallas, TX (USA) -- When Buddhist monk Luangphor Viriyang Sirintharo visits his home country of Thailand, the crowds following him are so large police must escort him around. 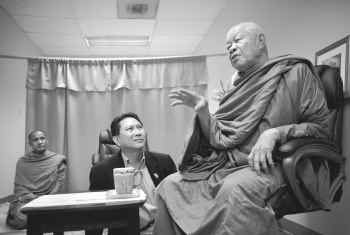 Getting within distance to see him is nearly impossible.

But for two hours Sunday afternoon, Viriyang sat before 30 people inside a nondescript northwest Dallas strip center to spread the word about meditation.

"I would like to extend meditation to people around the world," the 90-year-old man wearing a ruffled saffron robe said in broken English. "Meditation is very good."

Viriyang came to Dallas over the weekend to oversee the opening of the third year of the Willpower Institute of Dallas, his only meditation center outside Canada and Thailand. He said he hopes his meditation centers promote world peace and happiness, and reduce wars.

It's a promise Viriyang has tried to fulfill since he was 13 years old and discovered his innate ability to meditate, he told the crowd. Many people bowed before him and clasped their hands as he spoke. One person sat shoeless in a cross-legged yoga pose on the ground.

"I had extraordinary happiness," Viriyang said about his first meditation experience in a northeast Thailand temple. "My spirit came from my body."

But a few months after discovering meditation, he said, he had an accident and was paralyzed.

When an ascetic visited him, Viriyang told him he would devote his life to meditation if the man healed him.

Viriyang recovered and then lived 20 years in the Thailand jungle to become a master meditation instructor, he said.

Yet he told the crowed Sunday afternoon they could become one much sooner – and for free.

"I developed this instructor course, and in only six months, you can become a meditation instructor," said Viriyang, who has thick, leathery calloused feet from time spent in the jungle.

"You work yourself into such a calm state," said instructor Wilkes Alexander, a construction attorney. "I'm starting to figure out a lot more how things on the inside start to work. I think we often don't know how the mind functions."

Alexander said meditation taught him to relax and control his emotions. Now, he said, his friends call him "the Zen lawyer."

After Viriyang finished speaking, the crowd chanted an ancient Thai verse to him. And they then created a single-file line and placed flowers before him.

He was scheduled to leave Dallas this morning to return to Canada, where he'll oversee the opening of his other meditation centers.

"I hope in the future, Americans help teach meditation around the world," Viriyang said.