Buddhism in the Midwest

Chicago, USA -- Inside the main hall of the Drepung Gomang Institute, gilded statues of Buddha and brilliantly colored images of fierce deities adorn the altar. As the smell of incense wafts through the air, a Tibetan monk chants a sutra, his low tones weaving a soothing, meditative melody. 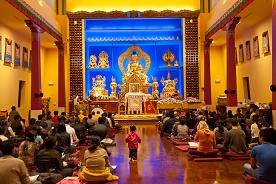 Dharamsala, India? Lhasa, Tibet? Some remote outpost in the Himalayas? Nope. It's in a neighborhood of Louisville, Ky. This Tibetan Buddhist temple is one of a growing number of such centers that have found a surprisingly receptive home in the Midwest and parts of neighboring Kentucky.

In May, the Dalai Lama will visit Louisville and Madison, Wis., but even if you can't see the renowned religious leader in person, you can sample the intriguing traditions of his homeland at centers that showcase the regional face of Tibetan Buddhism.

Expect to be greeted warmly at the centers, which welcome visitors of all faiths. Admire the bold colors and complex imagery of Tibetan Buddhism, sip a cup of tea, visit with a monk who hails from far away, and learn more about this new thread in the tapestry of American religious life.

The Dalai Lama has close family ties to this Bloomington center, established in 1979 by his oldest brother. The late Thubten Jigme Norbu taught Tibetan studies at Indiana University for two decades and was an internationally known advocate for the cause of Tibetan independence. Norbu's extended family continues to live in Bloomington and are closely affiliated with the center.

Located on 108 wooded acres, Kumbum includes a cultural center with educational displays, two stupas (dome-shaped shrines symbolizing Buddha) and a temple filled with statues and ornamentation. When the temple was dedicated in 2003, representatives from 11 faiths took part in the ceremonies, and holy objects from Christianity, Judaism and Islam share space in the shrine room with Buddhist statues.

A highlight of the grounds is the Mani Khorlo, a structure containing large Tibetan prayer wheels. The bronze wheels come from the Kumbum Monastery in Tibet and contain more than 800 million copies of the om mani padme hum mantra, a central prayer in Buddhism. It is believed that when a person reverently turns the wheel, blessings will be bestowed upon all suffering beings.

After touring the center, visitors can sample more of Tibetan culture in two local restaurants. The Snow Lion Express is run by Ya Ling Norbu, the widow of the Dalai Lama's nephew. Little Tibet also is a popular spot, frequented by Buddhist devotees such as actor Richard Gere when visiting Kumbum. For overnight accommodations, stay at the center's cozy retreat cottages, which are built in the shape of Mongolian yurts.

Two hours south of Bloomington, Louisville is home to the Drepung Gomang Institute. The center was established in 2001 as the sister organization to one of Tibet's most important monasteries, founded in 1416 and now a monastery-in-exile in India. The institute will serve as the primary host of the Dalai Lama when he visits Louisville May 19-21.

Part of the charm of this center is to see how it blends regional style with Tibetan flourishes. The somewhat bland exterior of the suburban house has been transformed into a Buddhist temple with a brightly decorated doorway, strings of Buddhist prayer flags and a statue of Kwan Yin, the Buddhist goddess of compassion. Inside, its shrine room contains statues, wall hangings and iconography in the signature bold red and yellow hues of Tibetan Buddhism.

Don't miss the shrine room's exquisite mandala, made from sand. Monks labor for weeks on the design of these fragile works of art, carefully applying the sand granules with small funnels. Once the complex design is completed, the mandala is ceremoniously destroyed.

The sand is put into a container and then released into a flowing body of water so that the blessings it contains can spread throughout the world. The process is a vivid enactment of the transitory nature of existence, a central teaching of Buddhism. While the center currently has a mandala on display, eventually it will be destroyed and returned to the earth, and another will take its place.