HAMPTON, Minn. (USA) -- The Wat Munisotaram Buddhist Temple near Farmington, Minnesota was a destination point for thousands of Buddhist faithful the weekend of Aug. 20-21, when the Heart Shrine Relic Tour: An Exhibition of Ancient and Sacred Buddhist Relics, went on display as part of the world tour. Buses of faithful and curious came from the local area and from the surrounding states all weekend. 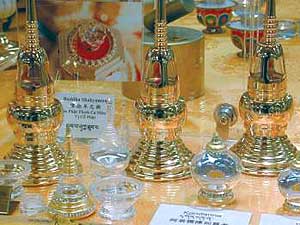 The free event was also a fundraiser for the construction of a 500-foot tall golden statue of Maitreya Buddha (www.maitreyaproject.org) scheduled to be completed 2010 in Kushinagar, northern India. Maitreya Buddha is known as the Buddha of loving-kindness, and when the tour finishes, the relics will be permanently enshrined in the heart of the statue – to become a holy destination for Buddhists.

Two Buddhist nuns, Carmon Straight, originally from Canada, and Yi Fong, a Taiwanese who now lives in San Francisco, travel with the relics and took part in the ceremonies and blessings. They unpacked the relics in their golden containers, and presented them to the monks – who then blessed each of the faithful and allowed them to pour water over a baby Buddha statue.

“As we make an offering of prayer and walk to the Buddha and poor water on the baby Buddha, imagine the water pouring down you and washing away negativity and imperfections,” said Straight, who reflected on the experience of traveling to the several host temples and monasteries as positive and that people become good friends in the presence of such holiness.

Straight said the relics are the not the cremated remains of the Buddha, but said when they were cremated, the lifetime of teaching spiritual enlightenment and compassion leaves crystallized “relics” that appear as bead or pearl like crystals amongst the remains of the historical Shakyamuni Buddha and well-known disciples - Maudgalyayana, Ananda and Sariprutra. Other relics are of Kasyapa Buddha who preceded Shakyamuni Buddha - as well as relics of many other saints and spiritual masters from the Chinese, Indian and Tibetan traditions.

They were collected and stored over the centuries in Tibetan monasteries until it was necessary to move them after the Chinese invasion in 1959.

“That essence is here, in the relics of cremation and we can feel that presence that was created in their essence from a lifetime of teaching,” she added.

The Ven. Meung Sang, Head Abbot of Wat Munisotaram and the Minnesota Cambodian Buddhist Society, led a procession of monks and community around the temple three times before the opening ceremony and blessings on Friday night. The temple had also just received new Buddha statues and urns from Cambodia.

Ven. Meung Sang said through an interpreter, that this was a momentous occasion for all Cambodians and all Buddhists here.

“We would like to express extreme happiness, and to join in celebration of the arrival and sharing of the relics for us,” he said. “We are extremely lucky to be given this chance to see the relics of Lord Buddha, as well as those of the disciples.”

This is the third time, that Twin Cities resident Chi Ngo saw the relics. She happened on them while in Washington, D.C. one year, and now makes a point of visiting them when traveling permits. She notices the look of spirituality on the faces of people immersed in meditation and prayer.

“Every time I went to see the Buddhist relics I felt special because it is my belief,” she said. “It's a great honor to be blessed.”

Volunteers from a local meditation class said the experience “was incredibly educational, and that being in this space was very comforting, and very peaceful.”

“This is incredible, and very moving,” said Ann Westfall, a visitor who once studied meditation in Thailand and is now a practicing member of a non traditional Buddhist organization in the Twin Cities. “As soon as the procession began I felt my heart open wide.”

Noel Lee and Jean Wallis, the two primary local organizers, worked on the project for the past six months. Wallis became interested after seeing the relics two years ago in a New Orleans monastery with her friend Emilia Bernat. Both are teachers of meditation and said they felt as though they were in the presence of an old friend and found it difficult to leave. They wanted to bring the relics here and thought it was destiny.

Saldron Tenzin, a Buddhist nun who was ordained by His Holiness the Dalai Lama, happened to be in Minnesota to see family (she was raised in Hibbing), and came to see the relics. As it turns out, Saldron once traveled with the relics herself.

Saldron was born into a Lutheran family. In fact her great grand parents founded the first Lutheran Church in Ortonville, Minnesota. She respects all religions and chose a path where she felt she could ask questions and become the best person she can be.

“We don't worship Buddha. It's a practice – a set of truths; it is logic and many things Buddha said about life and the world and the universe are being proven correct today,” she said. “Service of life and the mind. There is holiness but without a creator…Faith of your heart and mind.”