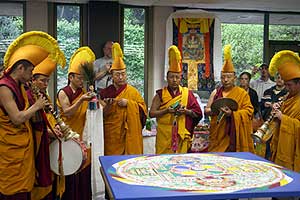 The mandala was disassembled in a closing ceremony April 14, when Xavier University President, Jesuit Father Michael Graham, was on hand to join the monks.

In accordance with tradition, each attendee at the closing ceremony received a bag of sand.

The mandala (Sanskrit for circle) is an ancient form of Tibetan Buddhism. Mandalas are drawings in three-dimensional forms of sand. In Tibetan, this art is called dul-tson-kyil-khor, which means "46 mandala of colored powder."

Millions of grains of sand are painstakingly laid into place on a flat platform over a period of days. When finished, to symbolize the impermanence of all that exists, the colored sands are swept up and poured into a nearby river or stream where the waters carry healing energies throughout the world, according to the Tibetan Buddhist tradition.