More than 10,000 show to see Dalai Lama speak of peace

Chicago, IL (USA) -- Stretched out on the lawn of Chicago’s Millennium Park, Molly Karcz soaked up the Dalai Lama’s message of peace along with gentle rays of the springtime sun. 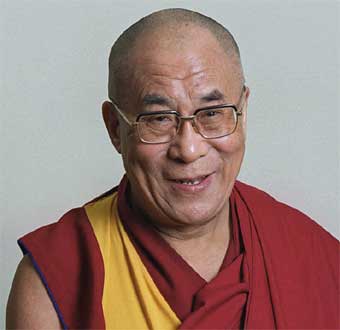 Thousands of others like her came Sunday to hear the 71-year-old exiled spiritual and political leader of Tibet offer wisdom.

Some were members of Chicago’s Tibetan community, but most were admiring non-Buddhists. And many left with the vow to let go of their anger and lead a more peaceful life.

“The biggest thing he said is about having compassion for those little things that irritate you every day, like the lady that cuts you off in the parking lot,” Karcz said. “You have to let go of that anger.”

In his first visit to Chicago since 1999, the leader of Tibetan Buddhists worldwide talked about how being attached to emotions like anger and hatred can rob people of peace.

“Anger initially destroys peace of mind. Hatred is worse,” said the 1989 Nobel Peace Prize winner, explaining that what he calls mental training can help people achieve peace of mind. That refers to, among other things, ceding control of external events and developing a response of compassion and forgiveness toward people who anger you.

JoDe Dietsch came to the afternoon talk to see in person the man who helped her come to terms with her mother’s suicide in 1993.

“I was consumed with grief,” said Dietsch, of Evanston, who was 29 at the time.

A Buddhist co-worker asked Dietsch, a Catholic, how anyone could help to comfort her, and Dietsch blurted out that she wanted a letter from the Dalai Lama.

She was feeling a little angry with Buddhism, she  said, because she thought a widely circulated photograph of a Buddhist monk setting fire to himself to protest the Vietnam war might have inspired her mother.

She was amazed and touched when a letter from the Dalai Lama arrived, and marveled at the fact it was dated July 19, 1995 — her birthday. There was no way he could have known, she  said.

“That letter, I have to say, it took my breath away. At the same time, it gave me a new focus. I still keep it close to my heart,” Dietsch  said.

“That was so helpful for someone of his stature, having a Nobel Peace Prize, to take time out for someone in the Midwest.”

The Dalai Lama, whose real name is Tenzin Gyatso and whom Tibetan Buddhists believe is the 14th reincarnation of the Buddha of Compassion, addressed more than 10,000 people crowded into the park. Hundreds of others unable to get tickets stood behind police barriers, straining to hear from a distance.

He expanded on the idea of mental training in his morning talk, “Eight Verses for Training the Mind,” at the Harris Theater, which drew about 1,500 people. Later he offered a more general, practical approach to living in the afternoon talk, “Finding Inner Peace In a World Full of Turmoil.”

In both cases, he was accompanied on the stage by Buddhist monks who listened attentively from floor cushions. A translator offered him occasional help in articulating complex ideas in English.

He is visiting from his home in Dharamsala, India, where he lives with a community of Tibetans who fled when China took over Tibet in the 1950s. As both the spiritual and governmental leader of Tibet, he has led a nonviolent resistance to that takeover ever since.

Known for his charisma and ability to make spiritual concepts understandable, the Dalai Lama often poked gentle fun at himself and erupted into easy laughter. He started his afternoon talk by joking about his bald head, “so the inner wisdom is shining out from here,” he said, laughing.

His message hit home with Barbara Richardson of Oak Brook and her friend Sue Ross of Lombard.

“What struck me was his lightheartedness and the idea of letting go of all these things that don’t matter — anger and bitterness — that cloud your perception and don’t let you see people clearly or compassionately,” Richardson said.

Ross said she tries to share that message of respect for the other person with her social work students at Aurora University.

“I just love how his message on one level seems so simple, yet on another level it’s so profound,” Ross said.

In explaining the eight verses, a Buddhist text, the Dalai Lama admonished the crowd to have a sense of concern and altruism for all people, saying that even criminals are worthy of human affection and respect.

He also talked about cultivating a sense of compassion for one’s so-called enemies.

That struck Marie Hanus of Lindenhurst, who attended both sessions.

“To feel compassion and love for a person that resents you — that’s the big one,” she said.

“I have so much respect for what he’s done in the world. If he can do it, why can’t I do it in my everyday life?”