by Hope Ingersoll, The Pilot-Independent, August 1, 2007

Walker, MN (USA) -- People lined up to get a mid-day ice cream treat at Walker's Dairy Queen stopped to stare at the two men walking down the street. Others across the street craned their necks to get a better view. 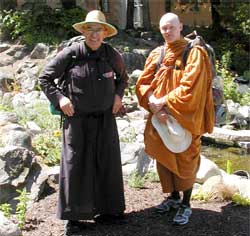 << Photo by Hope Ingersoll
Catholic monk Father William Skudlarek and Buddhist monk Jotipalo Bhikkhu pass through Walker as they walk the Paul Bunyan Trail from Brainerd to Bemidji. The monks pose for a picture next to the rock garden and waterfall at the Leech Lake Area Chamber of Commerce.

These two would be an odd couple almost anywhere in the world, but in the midst of shorts-clad tourists milling about a small town in northern Minnesota, they definitely stood out. Although they both had shaved heads and wore robes, the colors of their robes were a clue that there was some significant difference between them.

After walking 63 miles in six days, Father William Skudlarek, a Catholic monk in a black robe, and Jotipalo Bhikkhu, a Buddhist monk in an orange robe, arrived in Walker July 16 shortly after noon. The purpose of their 100-mile journey from Brainerd to Bemidji on the Paul Bunyan State Trail was to demonstrate harmony between different religions.

Jotipalo, 42, from the Abhayagiri Buddhist Monastery in Redwood Valley, Calif., and Father William, 68, from St. John's Abbey in Collegeville, met a few years ago and developed their friendship and trip plans mostly via e-mail.

They started walking July 11, allowing themselves two weeks to arrive at Bemidji. By the time they got to Walker it was clear they were ahead of schedule and it would only take another three days to cover the 37 miles left to go.

Their intention was to live off the generosity of strangers, and to accept donations of food via the Buddhist monk's alms bowl and the Catholic's tupperware. However, they carried tents, sleeping mats and cash in their backpacks, in case they needed to camp out or buy food.

Since leaving Brainerd, they had been given beds indoors all except one night, and only had to buy a meal once, in Nisswa.

As they stood on a corner in Nisswa, holding their alms containers, "We had the impression people were pretending not to notice us," the monks recalled. "We finally broke down and bought cheeseburgers."

The next day a woman on a bike accosted them on the trail and said, "You were the talk of the town in Nisswa, including people saying, 'I swear I saw that Buddhist monk eating a cheeseburger. I thought Buddhists were vegetarians.' "

Jotipalo explained that while Buddhists prefer vegetarian food, they will eat whatever is offered.

However, they added that overall, most reactions to them have been positive and generous.

As they resumed walking on the trail just north of Backus Sunday morning, they came across a cardboard box set off to the side. Jotipalo said to Father William, "I bet that's for us."

Sure enough, there was a note in the box that said, "This is for the Catholic and Buddhist monks who are walking. So don't take this. Unless you have seen them so you know where they are, then you can take it to them."

This care package had a variety of fresh fruits and vegetables, including cherries, peaches and corn and was signed, "-The Fresh Fruit Man in Pine River."

Every day on the trail, they were stopped by at least a few bikers and hikers, who all seemed to have deliberately sought them out to express their interest in and appreciation for the message they were trying to get across with their journey.

"If people have some kind of connection with us or someone told them about us, then they are very generous and outgoing. If they've never heard of us, then they tend to be guarded," Father William explained.

The exception to this was a woman in Nisswa (not the one on the bike trail) who didn't hold back. She marched right up to Father William and belted out, "Why are you dressed so funny?"

Father William replied, "You think I look funny. Wait until you see the other guy."
Jotipalo shared that this sojourn basically started two years ago, when he and another monk attempted to walk from New Orleans to Itasca State Park. At Memphis, Tenn., he fell ill, so they had to stop walking.

"Down in those Southern states, we were proselytized and told we were going down the wrong path. Yet people also showed more effusive Southern hospitality. Like we expected, we haven't encountered those extremes in northern Minnesota," said Jotipalo.

"Although people up north here are generally less effusive, they are still, overall, very warm and friendly," interjected Father William. "Just on our way into town, two cars pulled over and asked if we needed anything and if they could take our picture."

A monk is generally defined as a member of a male religious order who lives in a monastery or hermitage and observes celibacy. There are differences in the practices of Buddhist and Catholic monks. Buddhists own everything in common and receive everything through alms, while Catholic Benedictine monks live by the labor of their own hands and can own their own property. Buddhists believe in generosity and deliberately don't do anything to raise money.

When asked if they agreed that there are many paths to God, or if they felt that their way was the one right way, they both exclaimed, "I'm right!" and laughed with each other.
Jotipalo clarified that because Buddhists don't believe in a god, as such, they would call it a path to end suffering, or to attain Nirvana.

"Are there many paths to ending suffering, to realizing the fullness of what we're meant to be as human beings? I would say there are," conceded Father William. "Yet what is really central to Catholicism is the relationship with Jesus Christ, and through that relationship suffering is transformed to a new life, and then resurrection."

Although both men are deeply committed to their own religious perspectives, the purpose of this walk was to highlight their shared belief in harmony in the face of religious difference.

Father William affirmed, "Even though our way of viewing the world and our way of trying to make sense of the world may be different, that doesn't mean we have to be in opposition. "

While Jotipalo believes in past lives, which is a tenet of Buddhist teachings, Father William admitted he can't even wrap his head around the idea, but conceded with sincerity, "I may be wrong. We can learn from one another. I can learn from the Buddhist way; the Buddhist emphasis on the mind; how the mind creates suffering; how what I'm doing in my mind is very important."

Compared to other religions, such as Judaism or Islam, Buddhism is the least likely to elicit controversy with Christianity. It is neither descended from Abraham nor considers Jerusalem a holy site worth crusading for. Moreover, there are extraordinary similarities between the story of the life of Buddha, who lived in approximately 600 BC, and that of Jesus Christ.

Buddha was born of a virgin, had 12 disciples, performed miracles and wonders, healed the sick, fed 500 men from a "small basket of cakes," and walked on water.
He was also crucified in an act of sin-atonement, suffered for three days in hell, was resurrected, and then ascended to Nirvana or "heaven." Buddha was considered the "Good Shepherd", the "Carpenter", the "Infinite and Everlasting." He was called the "Savior of the World" and the "Light of the World."

Evidence such as this has been used by some to support the claim that the life of Jesus Christ is a story or myth based upon the Buddha's life story, just retooled for a different society in a later age.

Jotipalo and Father William agreed that, above all, it is important to delve deeply into one religion or belief system, instead of practicing "designer" or "cafeteria" religion, where a person picks and chooses a little bit from various belief systems to create their own.
Father Williams explained, "The deeper the roots go, the farther out the branches can spread."

Jotipalo agreed, "It's like digging a well in California. If you dig 10 feet here and 10 feet there, you never hit water. But if you stick with a certain spot and dig 100 feet, you're more likely to find what you need."

Asked what they most enjoy talking about during their long walk, they replied in unison, "Division 3 Football!"

What the monks may have most in common is their sense of humor, and, like many male friendships, an interest in talking about sports.

Father Mark Coen of St. Agnes Catholic Church in Walker invited the monks to stay at the church Monday night and to attend mass the following morning.

Monday evening the monks could be seen strolling the streets of Walker, eating ice cream cones.

They admitted that Dairy Queen had been one temptation they hadn't been able to resist.