Jefferson Elementary School Students have opportunity to meet a monk

MUSCATINE, Iowa (USA) --The joyful smile and thoughtful words of Hoeurn Somnieng triggered more of the same Wednesday at the Tantra Thai restaurant in downtown Muscatine. 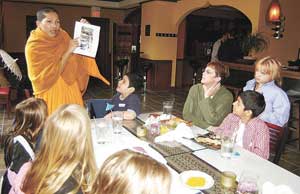 Hoeurn, a Buddhist monk from Cambodia, visited with third-graders from Jefferson Elementary School as they ate lunch at the restaurant.

Teacher Deb Wieskamp said the trip to the restaurant and meeting with Hoeurn were part of a Junior Achievement field trip, coordinated by Tammy Rominger.

Rominger works at the Muscatine Heart Study office which, like Tantra Thai, is located in the former Hotel Muscatine. Restaurant owner Kevin Zhang agreed to be part of the field trip that coincided with Hoeurn’s visit to Iowa.

Hoeurn, 27, is participating in an exchange program with St. Ambrose University in Davenport. Zhang, who is Hoeurn’s friend, invited him to meet with the children.

When Hoeurn asked the students if they knew where Cambodia is, third-grader Ernesto Lujan quickly answered “Asia.”

Later, Lujan explained that he is interested in maps and globes and studies them for fun.

Hoeurn is the executive director of the Life and Hope Association in Cambodia, which includes an orphanage with 45 children. Life and Hope sends those children to school, but the families of most Cambodian children cannot afford to do the same, he said.

Lack of food is another hardship in Cambodia, where the average wage is less than $1 a day, said Hoeurn.

Hoeurn told the children some facts about his faith. He said the bright orange material he draped around his shoulders is a symbol of peace in Buddhism.

“If you want it to be a peaceful day, you can choose this color,” he said.

“Be good to everyone and make sure your goodness comes from the heart,” said Hoeurn.

In an earlier interview, Hoeurn, who attends a Buddhist University in Cambodia, said he came from a poor family, but his education in the Buddhist faith provided him with life-changing experiences.

In 2002, he began working regularly with people infected with the HIV virus.

In 2005, Hoeurn and his fellow monks of Wat Damnk established the non-profit Life and Hope Association.

This is Hoeurn’s third visit to the United States, where he is learning more about establishing a viable public education system in his own country.

“Buddha said ignorance is the root of suffering,” said Hoeurn.

Hoeurn said his own mother, Savon, had a difficult time managing a family with little education and earning potential.

Savon is a Buddhist nun now and lives very happily he said, but he wants his students to have a stronger start in life.

The Life and Hope Association also conducts a junior high and a six-month vocational training program for older students.

Hoeurn said his goal is to help the girls who attend his program to have control over their own lives before they marry and have children.

He also hopes the students he meets and works with today will grasp his vision for future generations.

After listening to Hoeurn  describe the difficulties the Cambodian children deal with, third-grader Carlos Yague raised his hand and said, “We could go over there and help them, then they could have a better life. That can make the world a better place.”