Tibetan at peace in Michigan

Others long to go back as Dalai Lama's visit evokes home

Ann Arbor, MI (USA) -- Almost 50 years ago, Gelek Rimpoche was driven from Tibet by China's Communist government. Just 20, the Buddhist monk was forever cut off from his family, roots and the center of his faith. His friends and religious leaders were thrown in jail. And years later, he learned his mother had died in police custody after weeks of torture. 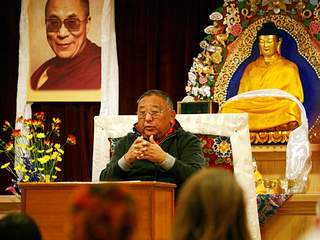 << Gelek Rimpoche, founder of the Jewel Heart Tibetan Buddhist Center in Ann Arbor, says at 68 it's too late for him to return to Tibet. He's a U.S. citizen now and spends time seeking support for his homeland. SUSAN TUSA/DFP

But despite all that, "I don't get depressed," said a smiling Rimpoche, 68, the head of a Tibetan Buddhist center in Ann Arbor. "That's because of Buddhism."

It's a philosophy and way of life that will get a wider audience this weekend as Tibet's spiritual and temporal leader, the Dalai Lama, visits Ann Arbor. His talks Saturday and Sunday come at a time of renewed protests worldwide over China's rule in Tibet.

Tibetans and their supporters have staged highly publicized protests in London, Paris, San Francisco and New Delhi as the Olympic torch makes its way around the world ahead of the Beijing games. In China, dozens of Tibetans have been killed as they intensified their opposition.

Since China's crackdown on an uprising in 1959, numerous Tibetans have fled their homeland, with the largest cluster of exiles, 140,000, in India. About 7,000 live in the United States or Canada, helped in part by sympathetic Americans curious about Eastern faiths.

Only about 50 Tibetans live in Michigan, but their culture and Buddhist faith have attracted thousands of non-Tibetans across the United States who sympathize with their cause.

"If you stand in the presence of His Holiness," Rimpoche said, referring to the Dalai Lama, "you feel totally different. He takes you on a ride of joy."

He paused and then chuckled.

Rimpoche -- who plans to follow up the Dalai Lama's visit with his own lecture tour of the Midwest -- is related to the previous Dalai Lama and comes from a well-known family.

He said it's too late for him to return to Tibet.

Other Tibetan Americans dream of returning.

Like Rimpoche and many others who made it out, Tseten has a story of escape and loss.

When he was young, Tseten's family scraped by and was often hungry under Chinese rule. He recalled foraging for weeds and grass in the mountains near their home.

The constant fear made it worse. Tseten said the Chinese government had an extensive network of spies.

"Whatever we did, the Chinese kept watch on us very closely," Tseten said after a prayer service last week at Rimpoche's center, called Jewel Heart. "I felt like I was in prison."

Tseten was a Buddhist monk in Tibet, but religious repression made his life difficult.

In 1993, he fled for India with a group of about 25 other Tibetans. They hitchhiked and trekked through the mountains toward Nepal and then India.

Tseten said he survived on roasted barley flour mixed with water. At one point, the Nepali police jailed them, but they managed to get released and make their way toward India. He still has a scar on his right hand from when he stumbled on a sharp rock on a cliff.

After arriving in the city of Dharamsala, the headquarters of the Tibetan government in exile, they met the Dalai Lama.

"I thought, is this real or a dream?" Tseten recalled. "I held his hand and put it on my head and started crying."

In 1998, Tseten came to the United States on a Buddhist monk tour of various U.S. cities to publicize the Tibetan cause. Rimpoche then got him a visa.

He gave up being a monk and got a job at a hospital, because "if you walk around and go to work wearing the robes, people will think you're crazy," he joked.

During the past month, he has kept a close eye on news of the protests in Tibet and worries about his two brothers.

"But my phone call can't get through," he said. "These last few weeks, I can't think straight."

Ujjen Tsewang, 48, of Ann Arbor also worries about his family in Tibet.

"So many people have disappeared," he said.

Tsewang makes sure to teach his two teenage sons the Tibetan language, but he fears that unless Tibetans get greater autonomy, their centuries-old culture will disappear.

... and a new life in Michigan

At the age of 4, Rimpoche was tapped to be an incarnate lama, a prestigious title that meant he was destined to be a Buddhist spiritual teacher. Rimpoche moved away from his family to live in the Drepung monastery, where he spent long days studying and debating Buddhism.

But in 1959, Rimpoche and others fled on foot, the sound of gunfire at their backs, he said.

In India, he met Americans interested in his faith and then moved to the United States.

During the past 20 years, he has become a teacher to Americans looking for Buddhist wisdom. The beatnik poet Allen Ginsberg was a student whose last rites were performed by Rimpoche. Music composer Philip Glass is another student; the two plan to lecture today along with actor Richard Gere in Hill Auditorium at the University of Michigan.

Rimpoche gave up being a monk several years ago and has a girlfriend with whom he raises two of her grandchildren. He's also a U.S. citizen, asking the government to help Tibetans.

"America protects freedom, human rights and democracy around the world," he said. "So I hope Tibet can benefit from that."