Woodstock, Illinois (USA) -- It took a while, but Orgyen Trinley Dorje came home on Monday - home to his habitat in the West that is. 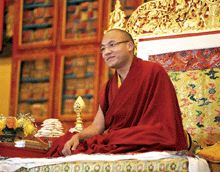 << His Holiness the 17th Gyalwa Karmapa sits on a throne in the KTD’s Shrine Room.

Dorje, who is the 17th Gyalwa Karmapa, or head of the Kagyu section of Tibetan Buddhism, was greeted on a windswept mountaintop where hundreds gathered at the Karma Triyana Dharmachakra, or KTD, on Meads Mountain Road in Woodstock.

The Tibetan monastery is the North American seat for the 17th Karmapa, a baby-faced 22-year-old spiritual leader who, in 1999, made headlines when he was 14 and pulled off a harrowing escape from China to India across the Himalayas.

On Monday, there was no escaping the passionate feelings that flowered in the quiet words of people who were either members of the KTD monastery or other Buddhist centers from across the United States.

Some came from as far away as California and New Mexico to get a glimpse of the Karmapa, or perhaps be fortunate enough to see him inside the KTD's multicolored Shrine Room where, sitting on a throne, he gently swayed to Tibetan prayers and chants.

"The Karmapa is returning to this place, this very sacred place," said Ilfra Halley, a monastery member for seven years. "He has a great commitment to the young. He is an example of true compassion."

Halley paused and added: "I would say that he takes my heart away."

Followers like Halley regard the 17th Karmapa as the reincarnation of his predecessor, the 16th Karmapa. His name was Rangjung Rigpe Dorje and he died in 1981.

The visit to Woodstock was a stop in the 17th Karmapa's 18-day visit to the United States that began Thursday and includes New York City, New Jersey, Colorado and Seattle. The Karmapa, or His Holiness, is recognized as the third most important figure in Tibetan Buddhism, behind the Dalai Lama. The two are close friends.

The Dalai Lama visited the monastery in Woodstock in September 2006.

Before the Karmapa arrived on Monday, a procession of maroon-robed monks and lamas moved slowly toward the monastery's main entrance on a makeshift pathway lined with traditional Tibetan-colored flags that were whipped by wind.

He was driven to the site in a black SUV, and the procession of lamas and played cymbals, horns and drums as the vehicle came to a stop.

When the spiritual leader emerged from his vehicle, surrounded by an entourage of security, he smiled, waved to the assemblage and then cut a ribbon to the main monastery structure that houses the Shrine room.

Steve Clorfeine, who lives in Accord, said he saw the Karmapa in Dharamsala, India, four months after the young leader he escaped from China.

"He was just radiant," Clorfeine said.

Inside the Shrine Room, some of the 200 people who had gathered joined in the chanting while they were served rice and tea. The Karmapa spoke briefly, saying through a translator that the monastery was impressive and thanking those who created it.

He spoke about inner peace and matters that are "beyond the intellect." He also apologized for not visiting earlier. His trip comes at a time during Tibetan upheaval and worsening relationships with China.

His apology drew laughter from the crowd, many of whom clasped their hands in prayer as he spoke from the throne.

When the Karmapa first sat on the throne, applause rose up from people who were watched on TV screens under a white canopy outside the building.

Arthur Hagen of Woodstock said the Karmapa's visit was a special event for him and the town.

"It is a great, auspicious day for Woodstock," Hagen said. "He's a bodhisattva ... an enlightened presence in our midst."