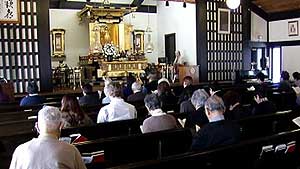 At Sunday’s services at the, hearts and minds kept returning to the tragedy.

“We hear a lot of stories of people walking down 45 flights of stairs, walking home, taking 8, 12 hours to get home because nothing was running,” said Kiku Taura, who used to work in Japan, and still has co-workers in Tokyo.

Another member of the temple, Joanne Tohei, has a 35-year-old son living in hard-hit Fukushima, where a nuclear reactor is in danger of melting down.

“He thinks he’s far enough away from the nuclear plant, however he’s got to make a decision whether or not to evacuate, so he’s just waiting for that news,” she said.

Luckily, Tohei and Taura say their friends and family are all OK, but they feel deeply for those who were injured or killed.

“I’ve spent a couple of sleepless nights, of course, but waking up in the morning, I’m thinking, ‘maybe it was just a horrid dream, maybe this didn’t happen.’ But I’d flip on the TV and then there it is, the news all over again, and realizing again that this did happen,” Thoei said.