Obon Festival at Buddhist temple offers a taste of hospitality

Ventura County, CA (USA) -- The annual Obon Festival put on by the Oxnard Buddhist Temple celebrates generosity — and generously fat, slurpy udon noodles and other foods are among the main attractions. 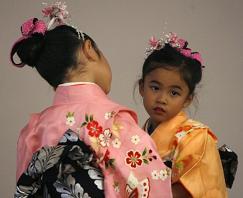 << Photo by Richard Quinn, Special to The Star
Emily Hiji (left) and Emily Lao perform a traditional Japanese dance Saturday during the Obon Festival at the Oxnard Buddhist Temple. The girls dance with Azuma Dance of Ventura County.

With dancing, martial arts and bonsai demonstrations in addition to the food, Saturday's festival at the temple, 250 South H. St., was a way to welcome the community, organizers said.

"Buddha practiced kindness and appreciation. This celebration gives people a fun experience and a taste of Japanese hospitality," said the Rev. Henry Adams, minister at the temple. "The temple was originally for those of Japanese heritage, but now it's opened up to others. I'm not Japanese-American, and neither are many of the people here. When people are exposed early, they can transcend the cultural and linguistic boundaries that separate us."

This year's festival included a store featuring Buddhist books as well as books about Japan and books in Japanese. The bookstore is new, but overall, the event features many traditional elements, which Adams said is part of its appeal.

"People come here for the tradition," he said.

While the temple is known for its noodle booth at the Ventura County Fair, which offers an alternative to deep-fried dining options, those in the know say the noodles at the Obon Festival are better.

"Here, we have the space to make them in a professional kitchen," Adams said. "We're on our home turf here, so the noodles are better."

A highlight of each festival is the Bon Odori dance, which Beverly and Larry Fiery of Oxnard were looking forward to joining as participants. Beverly Fiery said she isn't a member of the temple, but she has been coming to the festivals over the years. She decided to join in the traditional dance, which is an "expression of joyful gratitude" honoring the dead.

Larry Fiery said he especially enjoys the food at the festival.

"It's always interesting to experience another culture. We like the size. It's not overwhelming," he said. The Fierys said they had been practicing the dance for the past month.
Lana Lee (left) enjoys a bowl of udon while her son, Aiden, digs into a Rice Krispie treat Saturday during the annual Obon Festival at the Oxnard Buddhist Temple.

Maile Kuo, 10, of Newbury Park, was dressed in a bright orange kimono, with her hair carefully arranged in an elaborate hairstyle decorated with flowers and ribbons and makeup, as part of the Azuma Dance studio, which presented a traditional dance. "

Her mom, Jennifer Kuo, said it took her 45 minutes to create the hairstyle and 15 minutes to apply the makeup. Getting dressed with the help of the dance troupe leader took another half hour.

"I saw a dance demonstration once and said I wanted to do it," Maile said.

Other features of the festival included a bonsai demonstration, which was announced by Nathan Revard of the Bonsai Club of Oxnard and featured many of the plants of master Sumi Arimura, who donated about 70 percent of the specimens on display.

Masako Mock, also a member of the club, was explaining the intricacies of the bonsai on display.

"We are looking to get more young people to join the club. We want to introduce the next generation to bonsai," Mock said. "It takes patience and it's hard to get young people to take over. We're here to plant the seed so they get the idea to do bonsai later on."

Also at the festival was the Sasaki Kenpo karate group, which offered a high-spirited choreographed martial arts display to music, including Jerry Lee Lewis' "Great Balls of Fire." There were also judo demonstrations, as well as other dance styles and a dharma service.

Another highlight each year is the farmers market, with area farms and produce companies donating everything from cherries, berries and other fruit to corn, lettuce, avocados and lettuce.

Call 483-5948 or go online to http://www.oxnardbuddhisttemple.org for information about the temple.