6th Anniversary of Against The Stream

The Buddha said his path to awakening was one of rebellion – a
subversive path that is against greed, against hatred, and against delusion. It is a path of radical, engaged transformation, a path of finding freedom and spending the rest of our lives giving it away. It is a path that goes...Against the Stream 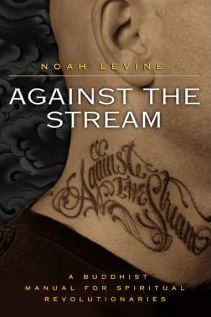 On February 20th, ATS’s original East Hollywood location will be celebrating six years of fellowship. All are welcome to celebrate by joining one of the many weekly classes. All classes are on donation basis, believing in the philosophy of dana (generosity or giving). ATS never turns anyone away; those who have give a little more for those who have not.

The appeal and success of ATS is simple, not only is the irreverence and blunt style of founder Noah Levine refreshing, but Buddhism and mediation are taught in straightforward, transparent methods. There are no rituals or hierarchy that
reign in other Buddhist organizations. ATS was founded by hardcore punk DIY principles and beliefs grounded in teaching only the basic principles as spoken by the Buddha himself. This humble approach has allowed ATS to tap into a
community of people who enjoy learning about the core fundamentals of Buddhist practice.

ATS mission statement: “We welcome people from all racial, economic, sexual, social, political and religious backgrounds and preferences and believe that the path of awakening is attainable by all and should be available to all. We strive to create a safe environment for all who come to practice.” This is the truth at the heart of all Buddhist teachings.

Noah Levine, author of Dharma Punx, Against The Stream and The Heart of the Revolution, is a Buddhist teacher, author and counselor. He was trained to teach by Jack Kornfield of Spirit Rock Meditation Center in Woodacre, CA. He is the founding teacher of Against the Stream Buddhist Meditation Society, with two centers in Los Angeles and over 20 affiliated groups around North America.

He teaches meditation classes, workshops and retreats internationally. Noah holds a Masters degree in counseling psychology. He is also on the board of directors of the Buddhist Recovery Network. Levine lives in Los Angeles.

WHAT: AGAINST THE STREAM BUDDHIST MEDITATION CENTER
CELEBRATES ITS 6TH ANNIVERSARY

Class schedules and special retreats are updated regularly on the ATS website .