New Buddhist center plans to reach out to community

Softly blew the breezes on that glorious morn / In Lumbini’s garden where Siddartha was born / From the Earth sprang flowers / Birds in warbles sang / Through the Earth and the heavens/ Strains of music rang. 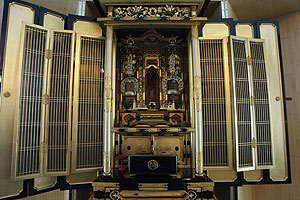 Finally, the voices are home.

“It took us almost 30 years to get here,” says Eileen Castle, board secretary of the new Las Vegas Buddhist Sangha Center, 4110 N. Martin Luther King Blvd. in North Las Vegas, at the monthly service. “To fill up the building won’t happen overnight, but now that we’ve built it, they should come.”

You know that feeling longtime renters have when they first become homeowners? That pride won’t wear off anytime soon for local Shin Buddhists who moved out of the West Charleston Boulevard building they rented from the Japanese American Citizens League for the past five years — only the most recent stopover in a journey that began in a member’s home garage in 1984.

In May, the sangha (a Sanskrit word variously translated as “community,” “fellowship” and “congregation”) moved to this airy, unassuming new space it purchased, tucked discreetly amid a children’s dentistry practice, a physical therapy center and a Steven Horsford for Congress campaign office in The Park at Northpointe off Martin Luther King Boulevard north of Alexander Road.

Borrowing the vernacular of the Strip entertainment scene, sangha officials say the building had been in the midst of its “soft opening,” with official grand opening festivities scheduled for Saturday.

“Because we’re a small organization, we can’t afford to have our own minister, so we import a minister from California and can only afford a once-a-month service,” says Roy Suzuki, the sangha’s building chairman. “We felt if we had our own building we could grow our organization to the point we could have our own minister and services more often. Maybe we can use it to generate some money and if other organizations want to use it, they can give us donations so we can support our sangha.”

On this recent Sunday, a line of congregants files forward to offer incense and bow in a purification ritual before an altar (“Obutsudan”) of brass, bronze and gold, filled with small, ornate symbols of Buddhism. Afterward, with an American flag hanging beside him, the guest minister — Hoshu Matsubayashi of Fremont, Calif. — tells a story of being in New York City when his wife was caught in a locked subway turnstile. Suddenly, a passer-by swiped her subway pass card into the turnstile’s automated pocket to free his wife then vanished into the crowd without waiting for a thank you.

“That is the beautiful heart of the people,” Matsubayashi tells the assemblage of wisdom-seekers, largely drawn from the local Hawaiian populace that observes Shin Buddhism. Among the numerous sects and subsets of the nontheistic religion that extend like tree branches from the teachings of the Buddha, Shin Buddhism is largely practiced in Japan and is most simply described in its principles as placing the striving for humility as the paramount goal, even over the pursuit of goodness.

“The Buddha says, ‘If I declare myself enlightened, I no longer am.’ You can get very close to Buddha-hood, but the minute you think you are — you’re not,” says sangha co-founder and adviser Wayne Tanaka, a retired Las Vegas educator and namesake of the Wayne N. Tanaka Elementary School on West Maule Avenue.

“The Buddhist community can be Thai, Cambodian, Vietnamese, Chinese, Japanese, Korean. Depending also on the dialect and the native language, there are several Buddhist churches that are already here. Ours is a sangha guided by the Buddhist Churches of America in San Francisco. Of our sect, we are the only one here.”

Aiming to engender community inclusiveness — and get the revenue stream flowing — the new home base is open to a wide variety of rental opportunities for various groups, as well as inviting birthday and anniversary celebrations and family reunions. Also, they are building up their own slate of activities, including classes on Japanese floral arrangements (“ikebana”) and drumming style (“taiko”), and even instruction on how to maneuver through Facebook.

“We’re open anytime we need to be,” Tanaka says. “We would like to welcome everyone who is interested, because this community was a welcoming place to us.”

Given that the congregation is largely elderly, efforts to recruit younger people are underway. “We’re getting a lot of people to come in and look and it’s been a lot more than I thought,” says Tilda Silao, who oversees marketing. “It’s been word of mouth so far, and our website (www.lasvegasbuddhist.org). We have other denominations wanting to use the center for their ministry. Our goal is to have this place filled every day.”

Surveying the new digs on his first visit, Matsubayashi — a teacher and author of several books on Buddhism and a veteran minister with Buddhist Churches of America — notes the regional value of the new center.

“For Buddhists, this is an important area,” he says. “For many Japanese Buddhists, they live on the West Coast. It’s important to spread the Buddhist message throughout the country, and everyone knows Las Vegas — even in Japan. Las Vegas has a very special place and I’m very happy to see the Buddhist community here.”

Services are held the second Sunday of each month, and this one was attended by Dr. Shar Edwards, who commuted nearly two hours to reach the Las Vegas center, the closest to her home in Fort Mohave, Ariz. “I read and study on a regular basis — the philosophy of the eightfold path (part of the Buddha’s teachings) just fits with me, it’s something I can keep in my mind every moment,” she says.

“But we need the connection with others and I was very pleased with the welcome here. There seems to be a sense of community here and that’s what I’m looking for.”

As services come to a close, recitations such as this draw the congregation together: