Portland, OR (USA) -- An image of Buddha meditating beneath a tree is now the main feature of the historic sanctuary in the former United Methodist Church on Elm Street in South Portland. 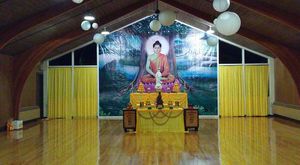 A place for local Methodists to meet and worship for 117 years, the building is now Maine’s first temple for Vietnamese Buddhists, providing an opportunity for members to practice their religion in their native language. It also serves as a community center for locals of Vietnamese descent.

Quang Nguyen, who first came to the United States eight years ago as an international student studying at Southern Maine Community College in South Portland, is the man responsible for the new Peace Buddhist Center.

Nguyen, a business investment adviser who now lives in Portland with his family, asked the Lumbini Buddhist Association in Lawrence, Mass., to support the creation of Maine’s first Buddhist temple specifically designed for Vietnamese believers.

He was sick of not having a local place to worship and of having to hire a van to take Vietnamese Buddhists to Massachusetts several times a year for special ceremonies and other events.

Nguyen told the Current this week that the Lumbini Buddhist Association purchased the Methodist church, located at 168 Elm St., for about $280,000, and that local Buddhists have been meeting there for about two weeks.

The Lumbini Buddhist Association also provided the Peace Buddhist Center with its first monk. He presides over the twice-daily readings from the sacred book of Buddhism, which is called the Tipitaka or the Pali Canon.

The Rev. Andrea Harvey, pastor at the former Elm Street United Methodist Church, said that her congregation is “still very much alive and looking for a space to rent in the Knightville area.”

For now, though, according to the church’s Facebook page, the congregation is holding church services at various locations around the city each Sunday.

In the long run, Harvey said, the church is “looking for a space to worship and hold our monthly free community dinners.”

The goal, she said, is to move toward “a home-church model where we hope to gather in the early evening, cook dinner together and worship as we share a meal.”

Harvey said the Methodists decided to sell the church building, which was constructed in 1898, because it had “fallen into disrepair and costs so much to heat. As a congregation we felt our resources would be better used in ministry rather than paying bills and keeping (up the) building.”

Nguyen said the Peace Buddhist Center was interested in the former Methodist church because of its size and its easy access to Vietnamese populations living in Portland and South Portland.

Nguyen said as soon as the purchase and sale contract for the former church went through, members of the temple started knocking on the doors of adjacent homes in the Pleasantdale neighborhood to introduce themselves and invite residents to come over to the temple and take a look.

He said most people in the neighborhood seem happy with the reuse of the former church and the intentions of temple members to rehabilitate and renovate the aging structure.

Overall, Nguyen said, “We want to have a positive impact on the neighborhood and bring diversity into the community.”

The goal of the Peace Buddhist Center, once it’s more firmly established, he added, is to hold some ceremonies in English in order to accommodate non-Vietnamese speakers.

In the long term, Nguyen said, the temple members would also like to open up their worship space to other Buddhist communities in Maine.

He said there are about 2,000 people of Vietnamese descent living in the area and about half of those are Buddhist, so the demand existed for the creation of a local temple.

During the first event held at the Peace Buddhist Center, more than 300 people turned out to help celebrate, including a number of people from the Lumbini Buddhist Association in Lawrence, Nguyen said.

DiPhilippo told the Current that the historical society has been “in communication with Rev. Harvey and has accepted a few items from the church to preserve,” as part of the transition process.

“I think it’s wonderful that the building will continue to be a place of worship, although it is with some sadness that I’m seeing the Methodist congregation sell the building,” said DiPhilippo, a longtime resident of South Portland.

Her family moved to South Portland in 1974 specifically because her father was sent to preach at the Elm Street church.

“My family lived in the Elm Street parsonage on Broadway for about eight years. I have many fond memories of attending church services, Sunday school, church fairs and bean suppers in that building,” DiPhilippo said.

“Unfortunately, with how the world has changed, South Portland can no longer support four Methodist churches. Buildings are very costly to maintain and, from what I understand, the current congregation has acknowledged that and they want to focus their resources on feeding people versus maintaining a building.”

The founder of Buddhism was Siddhartha Gautama, who was the son of an Indian warrior-king living in India about 566 years before the birth of Christ.

After becoming sick of his worldly lifestyle, Gautama wandered the world in search of understanding. Eventually he renounced his princely title and became a monk, depriving himself of worldly possessions in the hope of comprehending the truth of the world around him.

According to the website, BuddhaNet, the culmination of Gautama’s search came while he was meditating beneath a tree, where he came to understood how to be free from suffering, and ultimately, how to achieve salvation.

Following this epiphany, he became known as Buddha, which means the Enlightened One, the website states. The “Four Noble Truths” comprise the essence of Buddha’s teachings and Buddhism is now practiced by about 300 million people around the world.

BuddhaNet said the main goals of Buddhism are to lead a moral life; to be mindful and aware of thoughts and actions; and to develop wisdom and understanding.

At the new Peace Buddhist Center, a monk reads from the Tipitaka spiritual text at 6 a.m. and 6 p.m. every day, except for Monday, and Nguyen said the 6 p.m. reading on Sunday is the most popular service of the week.

Unlike the Methodist congregation, Nguyen said, those who practice Buddhism sit on mats on the floor, which is why the pews and altar were removed from the sanctuary.

In the future, Nguyen said, the temple members may also remove the steeple and make other alterations.

“A lot of work needs to be done and we can only go step by step,” he said.