Prayer wheel set to commemorate visit by the Dalai Lama

Hailey, Idaho (USA) -- With the gentle slam of a hammer and the poised creak of a crowbar, Hailey smith Larry Meyers cracked open the container used to transport an 800-pound bronze Tibetan Buddhist prayer wheel from India to Idaho. 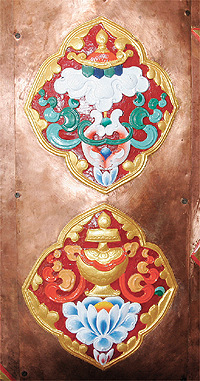 << Symbols like the lotus flower adorn an 800-pound bronze prayer wheel donated by Kiril Sokoloff to the community of the Wood River Valley in commemoration of the upcoming visit Sept. 11 of the 14th Dalai Lama of Tibet. Photo by David N. Seelig

Despite delays due to strikes in London and a delivery truck breakdown on the road from Salt Lake City, the prayer wheel finally arrived in the Wood River Valley last week. It is a gift from Kiril Sokoloff, the chief organizer of the Dalai Lama's scheduled visit to the valley the weekend of Sept. 11. It is set to be installed in a "Garden of Compassion" being built at the Sawtooth Botanical Garden, south of Ketchum.

Those who watched the unveiling in Meyers' corner shop in the Woodside industrial park were struck silent with anticipation and awe as Tenzin Dhonden, the emissary of peace for His Holiness the 14th Dalai Lama of Tibet, helped Meyers unpack the prayer wheel. Unwrapping layers of yellow foam packaging, Tenzin Dhonden described the decorations and significance of the painted and gold-leaf-embossed device.

"The prayer wheel is about bringing peace and harmony in our global community," Tenzin Dhonden said, holding his hands together as if cupping a lotus flower before his heart. The lotus flower, one of many decorations on the prayer wheel, is a common Buddhist symbol of enlightenment, as it grows in a swamp and appears free of the stain of mud, like people who are pursuing more positive energy in their lives.

"These are auspicious signs," he said, pointing to imagery on the prayer wheel.

Citizens of the Wood River Valley are learning more about the language of Avalokiteshvara, Sanskrit for the "Buddha of Compassion." The prayer wheel is intended as a permanent reminder of the Dalai Lama's forthcoming visit and his message.

"When we are turning the prayer wheel, we are requesting (Buddha) to send more healing light to change the energy on the planet," Tenzin Dhonden said.

Built in Dharamsala, the seat of the Tibetan government in exile, the prayer wheel is hand painted and embossed in gold leaf with depictions of the lotus flower and the chant "Om mani padme hum," the most common mantra in Tibet.

Tibetan people, mostly Buddhists, believe that the six-syllable mantra of the Buddha of Compassion helps to relieve negative karma, accumulate merit and remove suffering. Speaking the mantra out loud or silently and spinning prayer wheels with the mantra is the altruistic pursuit of enlightenment for all sentient beings, Tenzin Dhonden said.

"As you turn the prayer wheel clockwise you learn more about the perfection of giving love and kindness," he said. By reciting the chant and spinning the wheel, he added, one is turning the six "perfections" practiced by Buddhists: giving, moral discipline, patience, joyful effort, concentration, and tranquility (meditation) and wisdom.

In another offering of this practice, Tenzin Dhonden has been busy cutting and folding 22,000 silk scarves to give away during the Dalai Lama's visit from Sept. 10 to 13, a task requiring more than one pair of scissors.

The prayer wheel is filled with a million hand-written scriptures. Tenzin Dhonden said that between 15 and 20 people, including goldsmiths and painters cooperated to build the prayer wheel and roll the scriptures.

"It's like a nuclear device. It's really very powerful," said Patrick DeVosjoli, a volunteer helping to organize the Dalai Lama visit. "There are so many prayers—there is magic in there. This is a wonderful gift from Kiril Sokoloff to Sun Valley. It is a wonderful protection for Sun Valley and the state of Idaho.

"From a Buddhist point of view, this creates a great deal of merit. After (the Dalai Lama's) visit it will be the only prayer wheel this large in this area. This is a temple-sized prayer wheel."

Meyers is puzzling over how to create a way to turn the prayer wheel with the force of water at the Botanical Garden, located near the intersection of state Highway 75 and Gimlet Road. DeVosjoli said it took about three months for the prayer wheel to be built and that it was very tricky getting the sacred object through customs because it was not to be opened during the journey.

The Dalai Lama will address several gatherings during his time in the valley. The main event is a "Healing Address" on Sept. 11—the fourth anniversary of the terrorist attacks on the East Coast—when the spiritual leader will speak to 10,000 people at the Wood River High School in Hailey. The Dalai Lama will bless the prayer wheel on Monday, Sept. 12, in a private ceremony with the Buddhist community. Ultimately, it will be accessible to the public.

"He takes tremendous interest in his promotions of human value, religious harmony and global harmony," Tenzin Dhonden said. "This visit is going to be one of the most unique, with the diversity of the people, the beauty of the mountains and the right timing."

CNN is planning to broadcast the event on television.

"People have no choice but to have joy and happiness sink into the mind stream," Tenzin Dhonden predicted. Being delivered in a beautiful environment at high elevation, the Dalai Lama's message will spread easily around the world, he said.

"(The visit) is for the sake of those who suffered from the 9/11 tragedy, those who have lost a family member and those who still have fear in their mind."