Newport, OR (USA) -- The Monks of Gaden Shartse, a refuge for Tibetan people and their culture located in India, will pass through the central Oregon coast next week as part of a fund-raising tour to support the monastery and college at Gaden Shartse. 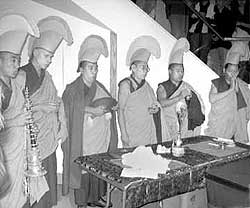 << A monk of Gaden Shartse performs the Khando (Dakini Dance) as part of the monks' tour of the United States, a fund-raising mission to support the continuation of the Gaden Shartse Monastery and College, a Tibetan refuge in India. The monks will pass through the central Oregon coast next week. (Courtesy photo)

A performance of traditional dances and rituals is set for 7 p.m. Tuesday at the Newport Performing Arts Center, and the healing ritual and blessing of Vajravidharan will take place at 7 p.m. Wednesday at the Yachats Commons.

The Vajravidharan is a ritual of purification including three stages: purification and the removal of negativities, the removal of subtle "negative imprints," and the offering of protection. The vajra master will take the form of Vajravidharan, the Buddha of Purification, and use his power to cleanse ritual participants of a range of maladies, listed by the monks as including sickness, mental disturbances, infectious diseases, disputes, enmities, misfortunes, bad omens, victimization by others, premature death, harm from rulers and thieves, influence of demons, obstacles, and other factors that work against a congenial life.

The Gaden Shartse Monastic College (popularly known as "Shartse") was originally founded in Tibet in the 15th century. After the Chinese conquest of Tibet in1969, the culmination of years of occupation, 48 surviving members of the college fled south across the border into India where they settled in army tents in a remote jungle area that was about a night's journey from the city of Mysore.

The monks built a mud and bamboo thatched dwelling in which they ate, slept, studied, debated, and prayed together. Many died from sickness and exhaustion; others survived but remained ill and bedridden.

Those who survived became very resourceful, teaching themselves how to farm the land by means of trial and error. In 1972, three years after settling, their fields were green with their first successful crops. Fifteen Tibetan children from the local Tibetan refugee camp enrolled in the newly founded monastery, funded by the selling of the produce. A simple everyday routine was set up combining education with physical labor and a rudimentary teaching staff of Tibetans, well-versed in history and Buddhist teachings, was established.

Today, in-depth education in all aspects of Buddhist philosophy and practice is the focal point of the academic program at Shartse. The duration of the monastic program is 24 years; students interact with their teachers on a daily basis and accommodations, food, and instruction are all "free" provided by the monastic administration.

A world tour by members of Shartse in 1988 enabled the administration to begin the new Education Development Project. This interagency body now monitors all educational development and makes suggestions regarding the necessity of improvements and modernization.

Funds raised through performances and public rituals, through admission fees and donations, directly supports the continuation of the monastery's ongoing efforts to educate Tibetan youth. Tickets for Tuesday's performance in Newport are $12, and admission to the healing ritual and blessing set for Wednesday in Yachats is $20.

The monks will also be available Monday, Tuesday, and Wednesday for private ceremonies, healings, astrology readings, and home and business blessings. To schedule a private session, contact Claire McGee at 265-9647 or via e-mail at djk2008@pcez.com.

More information about the Gaden Shartse Monastery and College is available at www.gadenshartsetour.org.