Buddhist Peace Fellowship Statement on Hurricane Katrina and its Aftermath

San Francisco, USA -- The Buddhist Peace Fellowship sends our thoughts and prayers to all those who have been affected by Hurricane Katrina, especially the citizens of New Orleans. 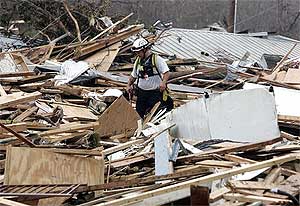 We can't begin to imagine the scope of this tragedy, as it unfolds before us. Those worst stricken by this disaster are overwhelmingly Black, poor, and disenfranchised.

BPF encourages all of our chapters and dharma centers across the world  to contribute to emergency relief efforts as soon as possible. Two organizations that we highly recommend are the American Red Cross and America's Second Harvest (see information below).

In the long run, much more will be needed in terms of offering support to help this region of the U.S. recover. Many questions are raised by this situation, including the distribution of resources in our country which have prioritized military spending over critical domestic tasks such as strengthening the levees around the city of New Orleans; the diversion and deployment of the U.S. National Guard troops to Iraq
rather than within their own states; and the intersection of institutionalized racism and poverty that has resulted in so many good people living in such desperate conditions. It is heartwrenching to know that many had so little resources that they weren't even able to leave the site of disaster.

There will be time to take a deeper look at these hard questions. But in this moment, we believe that the appropriate response is to rally around the people of Alabama, Florida, Louisiana, and Mississippi and offer support of all kinds – material, emotional, and spiritual.