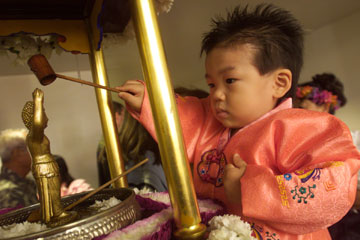 After a 9 a.m. service at the Kapiolani Bandstand, the Hanamatsuri festival continued with a bon dance, a puppet show of the birth of Buddha by Pacific Buddhist Academy students and bouncing castles for children. Snacks were sold at food booths. The event was opened to the public.

Hawaii's Japanese Buddhist temples traditionally celebrate the birth of the Shakyamuni Buddha, the Indian prince who founded the Buddhist philosophy, in April at the time of the Japanese spring flower festival, Hanamatsuri. Other branches of Buddhism from China and Southeast Asia celebrate the tradition in May.

Ministers from several Japanese denominations participated in rituals symbolic of the historical Buddha's birth more than 2,500 years ago. They poured sweet tea over a statue of the baby Buddha, symbolizing the gentle rain that fell at his birth in Lumbini Garden in Nepal near the Indian border. An altar of flowers recalled the lush site of his birth.