Marysville, CA (USA) -- Terry Manji remembers when Marysville’s Japantown was the center of a thriving, tight-knit community of farmers and farmworkers. 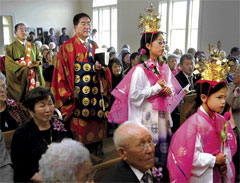 << Members of the Marysville Buddhist Church make their way forward during a service to celebrate the 100th anniversary of the founding of the church in October.
Brian Drake/Appeal-Democrat

Right beside Chinatown – south of Third Street and east of D Street – Japanese Americans owned barber shops, restaurants, clothing and grocery stores – more than 40 businesses in all – prior to World War II.

And at the heart of the community, the Marysville Buddhist Church helped keep the customs, language and values of its founding members alive.

Last month, its members celebrated the church’s centennial with a dinner and ceremony, conducted in both Japanese and English. The celebration, according to its eldest members, will likely be the last.

“The church is what holds the Japanese community together,” said Manji, who at 78 considers himself a member of “the younger set.” That community “is not as strong as it used to be,” he said.

An official roster lists about 90 members. But the generation that has kept the church going for the last couple of decades is dying off at the rate of 10-12 members per year. Many of those who remain are too infirm to participate in church-related activities.

Their children, born in the years during and after World War II, moved away in large numbers to attend college or take on professional careers in urban areas. With them went the future of the church and the community it sustained.

“There’s no way we can attract new members now,” said longtime member Hatsune Kadoi, 87. “Our membership will keep coming down.”

Kadoi’s parents were itinerant farmers who, like most Japanese working Central Valley fields in the 1930s, eventually planted family roots near one Japantown or another, for the sake of their children’s education.

Her father had arrived first in San Francisco in 1906, “when the earthquake (fire) was still smoldering,” Kadoi said. He did a number of day laborer’s jobs before winding up in Sacramento Valley rice fields with Manji’s father.

Like most immigrants, they struggled with the English language. Most immigrant men, according to Manji, were second-born sons of poor farmers in Japan who did not stand to inherit land there.

“My dad, he just followed the crops,” Itamura said. “Summertime, he came up here to pack peaches, Lodi to pick grapes, then Hood River (in Oregon) to pack apples.”

“Wintertime,” he said, “it was back here to prune peach trees.”

Some brought wives from Japan; others had their parents arrange marriages via mail, and they eventually made enough money to send for their brides.

By 1907, enough Japanese families had settled in Marysville, Yuba City, Colusa, south Butte County and surrounding areas to request that a Buddhist priest visit from Sacramento to conduct church services in private homes. Those services were the start of the Marysville Buddhist Church.

In 1918, members of the growing community leased a building on B Street and began a gakuen, or Japanese School, to supplement lessons from the local public schools.

The children’s introduction to white teachers and students was often a frightening one.

“No one spoke English in the home, unless you had an older brother or sister,” said Manji. “It was very difficult at first to be mingled in with all those English-speaking people.”

Itamura said he remembers one day in particular from his first school year.

“The teacher said, ‘Put your head on the desk, and the Easter Bunny’s gonna come,’” he recalled. “It was so confusing. We were really stuck between two cultures.”

Manji remembers the day in 1938 when the current church building was officially dedicated.

Men on the roof threw mochi – cakes made of sweet rice – down to a crowd of people gathered below.

In those days, he said, Sunday Japanese School was exciting to him only because a trip to the ice cream store followed.

Later in the day, he said, “everybody would bring their family to watch a baseball game.”

Usually, those were held in East Marysville in what was known as Minors Park. The undeveloped lot was surrounded by small vegetable farms, or “truck farms,” operated mostly by Japanese families.

Soon, their baseball games would be played in even more remote locales.

Kadoi was newly married when news spread in December 1941 that the Japanese had bombed Pearl Harbor.

Shortly afterward, she, like all other Japanese Americans on the West Coast of the U.S., was ordered, via decree by President Franklin D. Roosevelt, t0o pack up what she could carry and prepare to board a train bound for an internment camp.

Those living east of Highway 99 were sent to a camp at Tule Lake on the Oregon border.

Those living west of 99 were sent to a camp outside of Merced and later to the Granada (Amache) camp in Colorado.

Kadoi, who went to Tule Lake with her family, considers herself lucky. Her husband’s boss took care of their home in her absence. They were able to return to the house after the war.

Most who returned to the Mid-Valley “had to start completely from scratch,” said Manji, a Yuba City resident.

Camp guards and residents of neighboring towns had introduced Manji and many other Japanese American children to virulent anti-Japanese prejudice for the first time.

From that point on, it was in evidence, seemingly everywhere.

Like other American children born after World War II, successive generations from the YubaSutter Japanese community have become increasingly detached from their parents’ roots, Manji said.

As youngsters, they were brought in large numbers to study at the gakuen – to absorb their grandparents’ language and customs – before venturing off into the greater world.

But that generation – the last to be schooled in Japanese language and culture – left the area later in droves to attend college or work elsewhere. Most didn’t return.

Kadoi’s four kids – all adults now – “went away to work in Sacramento,” she said. Only her youngest daughter takes her own child to a Buddhist church.

They assimilated, they succeeded, they lost their roots. It’s the age-old irony of the immigrant family story, and the irony is not lost on the last of the Marysville Buddhist Church congregation.

Regrets abound for the loss of old culture. The word, “haji” – or shame – once brought instant repentance and cautious behavior in a child.

“They would tell us, ‘Don’t bring haji to your family,” said Itamura.

“We all heard that,” said Kadoi. “Your grandparents, your cousins – everybody would be shamed if you did something shameful.”

“Bringing them up in the Western culture,” said Manji with a sigh, “we lost some of the good parts of being Japanese.”

Kadoi brings up the possibility of recruiting non-Asian Buddhists to help fill out the church’s ranks and keep it afloat. But nearly all non-Asian Buddhists practice a form of the religion with enough fundamental differences to make the two incompatible, she said.

“In our philosophy,” said Manji of the Marysville church’s Pure Land form of Buddhism, “all you have to do is have faith in the Amida Buddha.”

In Zen Buddhism, which is the form of Buddhism practiced by most non-Asian adherents, you “believe that you’re going to get yourself to the Pure Land by your own power.”

As in its earliest days, the Marysville Buddhist Church now shares a minister with another Buddhist church – this time, with one in Placer County. Services are held once a month, except when there is a death in the community. Funerals call for Buddhist ceremonial rites.

Last year, the church was made wheelchair-accessible. Money donated or willed to the church by members paid for the improvements.

But costs of operating the church far exceed the meager income from its aging congregant base, Kadoi said.

The church’s 100-year anniversary celebration was bittersweet, she said, especially for those of her generation who were still alive to see it.

Dozens of their grandchildren and great-grandchildren were present. They were Japanese Americans who never attended Marysville’s Japanese School. The school building itself has been razed and is now a parking lot.

The institution’s board members do not like to acknowledge that the end is near, Kadoi said, “because so many sacrifices were made for this (church).”

When the last service is performed here, she said, those ancestors who sacrificed so much “will be turning in their graves.”