Walla Walla, WA (USA) -- The estimated 100-plus people who filled the Thai City Restaurant on Saturday morning may have felt lucky to get a sneak peek — not to mention a taste of what’s on the menu — prior to the restaurant’s official opening today. 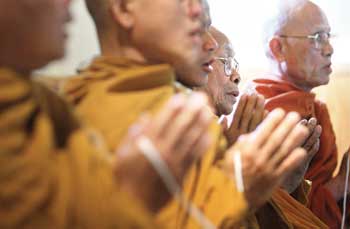 But owners Noy Kumsi and Song Suriyo were the ones who felt fortunate thanks to five special guests.

Buddhist monks from temples in Kennewick and Richland traveled to Walla Walla for a roughly hourlong blessing of the new business at 311 S. Ninth Ave.

Clad in saffron-colored robes, the monks sat in a row at a rectangular table, chanting in their native tongue, linked together by string woven through their clasped hands. The string, entwined around statues and a pot on the table and into the hands of the monks, represented the linking of spirituality and community, blessing water that afterward was flung onto the owners, their families and friends in attendance.

“This is for a blessing for the future,” Suriyo said after the ceremony.

A far cry from the typical ribbon-cutting ceremony in Western culture, the monk ritual is a tradition of Thai culture. Kumsi and Suriyo say their family members operate Thai restaurants from Portland to Pullman and numerous communities in between. All have opened with a similar blessing, followed by the presentation of food to the monks.

For a building that has been vacant more than a year, a blessing may have seemed in order.

Long known as home of the Polar Bear Club, the building was most recently home to the Time Out Tavern. Owner Ray Locati purchased the building a little more than a year and a half ago after the closure of the tavern. He said he’s been waiting for the “right” tenant ever since.

“You would never recognize it now,” Locati said last week. “It’s been pretty much gutted with all new electrical, plumbing, sewer, water, everything.”

Where customers formerly entered the building through a front hallway, lined by restrooms and office space, the renovated building has an open floor plan at the entryway. A fireplace on the east wall has been resurfaced. The wood beams refinished. Wainscoting lines the walls.

As important as the renovation has been the addition of a new Thai restaurant, owners say. The Walla Walla Valley has long been home to the Bangkok Cafe in College Place. But local residents repeatedly told Locati they’d like to see more options.

“As we know, in Walla Walla, there’s only one Thai restaurant,” Suriyo said Saturday. “That’s why we wanted to expand.”

A third Thai restaurant is expected to open on Spokane Street in downtown Walla Walla in October.

Suriyo said he had formerly operated a Thai restaurant in the Tri-Cities — coincidentally known as the Bangkok. But he sold that operation in favor of a move to Walla Walla. He and his family have since relocated here, while Kumsi will commute as needed.

“We figure this is a good community,” Kumsi said. He thinks local residents will feel the same about the restaurant’s pud Thai and tom yum noodle dishes.

And he and Suriyo hope the blessing from the monks — two of whom traveled from the Lao temple and three who came from the Thai temple — will bring the good fortune they’re looking for.

“We hope that we’ll get lots of customers,” Suriyo said.